David Cross in Conversation with Someone Who Loves Him 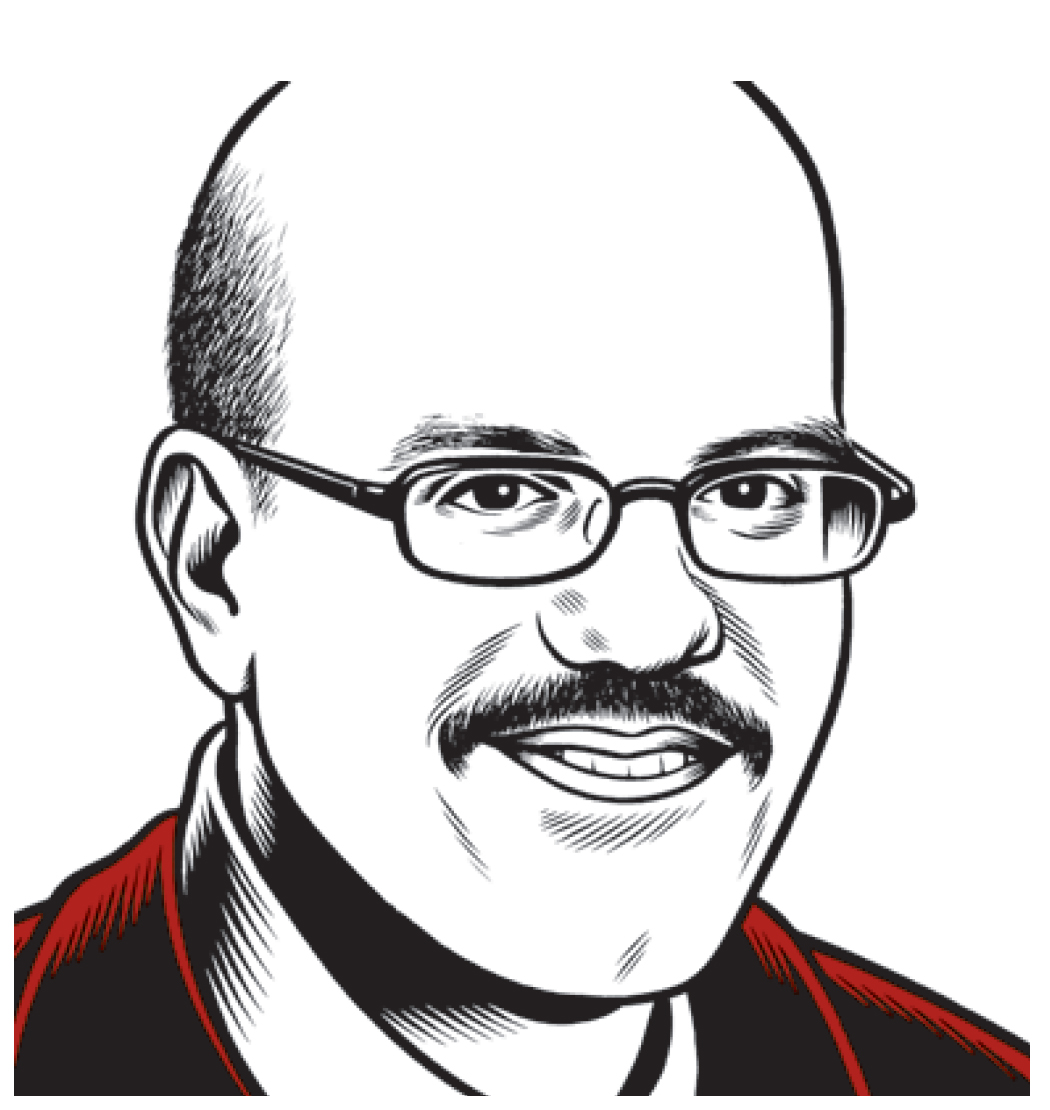 I am a nerd for David Cross. My fanboydom began in the mid-’90s, when I discovered Mr. Show with Bob and David and developed a comedy crush on “the bald one.”

Around the same time, I was working at the Second City theater in Chicago, and plastered the walls of the box office with publicity shots of David, so that it resembled the bedroom of a very confused teenage girl. One fortuitous evening, David Cross came to the theater for a show, and when he was coaxed into the office by my fellow employees, he was confronted by dozens of tiny reflections of himself. “Now I know how Leif Garrett felt,” he said, eyeing me nervously.

I spoke with David by phone. He was at a dog park in New York City. To get the full effect of this interview, you should have at least six to seven dogs barking in the background. At one point, David noticed a used condom deposited on a nearby bench. This disturbed him, for obvious reasons, and he wondered aloud at the sort of person who would have sex in a dog park. “Where can I fuck a dog?” he asked in a rednecky accent. “Oh wait, I know, the dog park. They’ve got plenty of dogs over there.” I don’t often get sentimental, but ten minutes of David Cross riffing on dog-fucking made me wish I was a kid in Chicago again, hanging on his every word.

LOVER: I should probably admit up front that I’m a fan.

LVR: I liked Mr. Show, but I was blown away by your first album, Shut Up, You Fucking Baby! It came out in 2002, shortly after 9/11, and I remember being shocked that anybody would talk so honestly and brutally about Bush. Did it feel, at the time, like you were saying something that nobody else had the balls to say? Or were you just frustrated and needed to vent?

DC: More the former than the latter. I’d say that it’s probably—no, I take that back. More the latter. Wait, I—OK, let’s say it’s 51 percent one way, 49 percent the other. I didn’t feel any sense of obligation. That’s never been the impetus for my comedy. It’s just Bush and 9/11 were at the forefront of my consciousness virtually every moment, especially living in New York. So the album was an extension of what I was going through personally, and the conversations and arguments I was having.

LVR: Did it ever cross your mind that it might be too soon to be making jokes about 9/11?

DC: It was never calculated. It was surprising to me how comics wouldn’t talk about that kind of stuff in the aftermath of 9/11. How could they just ignore it and talk about, you know, their funny sneakers or their grandma? It was really strange to me. I guess it was different living in New York. If I went to St. Louis, maybe I wouldn’t have said anything. But I didn’t care, really. I’ve never concerned myself with “Boy, I sure do hope everybody likes me.”

LVR: Quite the opposite. Sometimes it seems like you’re making a concerted effort to piss people off.

DC: Yeah, in the sense that it’s kind of thrilling. But I don’t want to piss them off just to piss them off. I’ll only say something if I believe in it, if deep down in my core I think it’s true. Like “Oh, Christianity is based on a pack of lies.” Or “Your government is destructive, lies to you, doesn’t care about you, has no respect for you, and holds you in contempt.” If it’s something like that, then I feel fi ne making my “jokes.” And please put jokes in quotation marks.

LVR: When you say things like that about religion and government, it’s easy to compare you with Bill Hicks and Lenny Bruce.

DC: I’ve never made those comparisons and I’d go to lengths to explain why they aren’t apt. I’m not nearly as funny or sharp as Bill ever was, and I’m much funnier than Lenny Bruce, though not as courageous. He said some funny things, but it was more about his courage and conviction. Bill Hicks was a friend and an inspiration and a way, way better and purer comedian than I could ever be—or ever hope to be.

LVR: Both Hicks and Bruce had a modicum of fame when they were alive, but became cult icons after they died. Could it happen the same way for you? Will you need to croak before you’re truly appreciated?

DC: No, no, of course not. I think I’ve blown that opportunity. If I’d died in 2002, maybe. But then you’d go, “That guy was awesome. Look what he did when nobody else was doing it.” And somebody would say, “Oh yeah? Check out this Scary Movie 2 DVD and tell me how much you like him now.” I cashed the paycheck and moved to New York and bought an apartment.

LVR: Wow. You’re more critical of your own career than some of the hard-core Mr. Show fans.

LVR: Do you ever feel like the fans hold you up to a higher standard than your worst critics?

DC: I really do. When I was doing Arrested Development, every once in a while we’d do a press thing or a Q&A with the fans, and somebody would ask me, “Do you feel like a hypocrite for doing a show on Fox television?”— which is inane to me for what I hope are obvious reasons. Did I feel like I was somehow responsible for lining the pockets of Fox Broadcasting, who then took that money and put it in Sean Hannity’s hands? Of course not. Arrested Development was a great project, and the project is more important than the context in which it’s seen.

LVR: Your fans may sometimes doubt your intentions, but they’re never as bad as your critics. The most vocal ones accuse you of being a smug, smart-ass comic who thinks he’s better than everybody else, the court jester for the liberal intellectual elite.

DC: Maybe. It’s funny you’d say that. You know this is part of a two-part interview, right?

LVR: How’d the interview with the hater go?

DC: It was a little strange sitting in my living room with somebody who really doesn’t like what I do or what I represent. But he was defi nitely civil, polite, and articulate. There were a couple things that I completely disagreed with him about, but he made a few points where I had to go, “Yeah, I guess you’re right.”

DC: Like that I’m condescending. It bugs me. But then again, I just have no patience or time, especially as I get older, for these long-winded and rational discussions about religion and Jesus and whether America is truly a Judeo-Christian society. I did for decades, but at this stage, I’m like, “You really believe there’s a devil? You’re a fucking moron. I don’t know what to tell you.” I know that’s condescending, sure. But Jesus isn’t coming back, there’s no happy old Wilford Brimley in the sky waiting to give you some presents.

LVR: When you go off on one of those antireligion tirades, I get goose bumps. Honestly, I really don’t feel like you need to be less condescending. If anything, I’d like to see more condescension.

LVR: I want more of that satiric bile, not less of it. I want to listen to your records and get so worked up that I smash the TV and set fi re to the furniture.

DC: It’s funny, I wouldn’t ever intentionally do this, but it’s easy to think, I gotta win back the people who don’t like me and fi nd me shrill and strident and too angry. I need to do more funny bits about the holidays and my sister’s driving. But if I do that, I’m going to lose you guys.

LVR: Just throw us a “Christians-are-idiots” bone now and again and we’ll always be here.

LVR: Is there any reason you’d ever retire from comedy?

DC: I was really discouraged by some of the negative press I got a few years ago, after my last CD came out. A part of me feels like if I dish it out I should be able to take it. If people disagree with me and want to articulate it, that’s not only their right but almost their obligation. It probably peaked with this thing in the New York Press.

LVR: You mean the “Most Loathsome New Yorkers” list in 2004?

DC: Yeah, that’s the one. It really got to me. I stopped doing standup for a few years because of it. I just had no desire anymore. I’m disappointed with how much it bothered me. And when I did perform, my sets suffered because of it. For two years, easily, my act just sucked. My heart wasn’t in it. I’d go into a set with a chip on my shoulder. I’d think, All right, somebody is gonna blog about this tomorrow. And sure enough, it always happened. I’d be doing a free set at a friend’s show, trying out new shit, and some blogger would write something like “Can you believe that motherfucker brought notes onstage? What the fuck?” It just made me not want to do it.

LVR: But why do those opinions matter? You’re not going to let some kid with a computer take the wind out of your sails, are you?

DC: It’s not just one of them, it’s the collective. If it were just one person, it wouldn’t matter. Maybe because I can do other things, I was like, “I don’t need to get on a plane and go to Grand Rapids, Michigan, for fi ve thousand dollars, for which I only make thirty-six cents of every dollar I earn anyway.”

Yeah, not worth it. I’ll just go and do fucking Curious George and get paid a hundred grand. The choice is not to be miserable.

“It Was Just Boys Walking”