David Cross in Conversation with Someone Who Hates Him 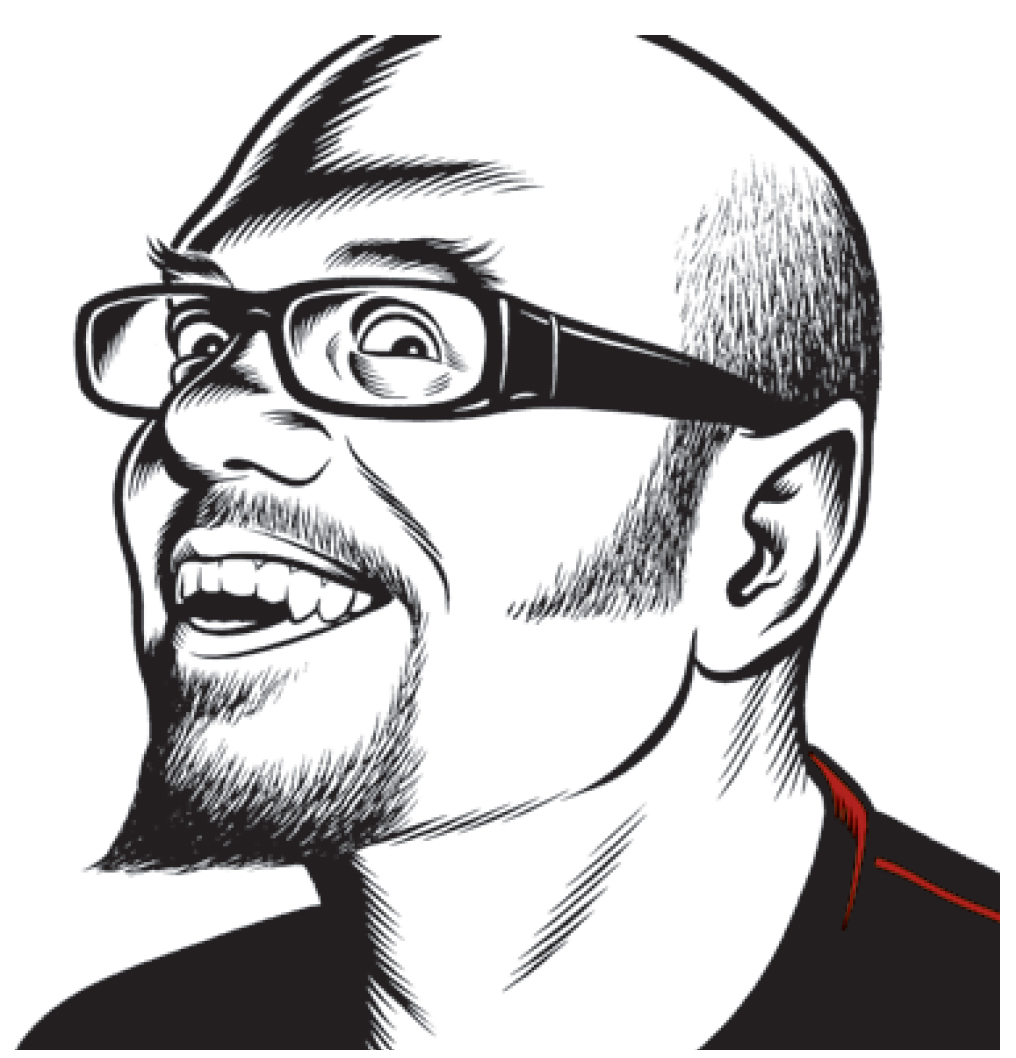 I have complicated and conflicting feelings about David Cross’s work, which is appropriate, as he’s a complicated, difficult performer. As I told him when we met, I think he’s talented. He has a nimble mind, great timing, and a knack for absurd humor. However, his performances often seem driven by an anger and smugness that overpower his appeal, particularly in his stand-up. I was managing editor of New York Press when he released his second CD, It’s Not Funny, which was the prime reason for his inclusion on the paper’s “50 Most Loathsome New Yorkers” list. We called him “meandering” and “not funny,” and wished that Andrew Dice Clay would inflict bodily harm upon him. Even though some on the staff, including me, were inclined to agree with his liberal anger, we thought Cross’s tone was alienating and shrill.

In addition, Cross has waged public crusades against seeming straw men like Creed’s Scott Stapp, Jim Belushi, and Larry the Cable Guy. I’ve always been confounded by the attention Cross paid them.

I chatted with Cross in late 2007 at his East Village apartment. He was extremely self-aware, willing to speak frankly about awkward subjects with admirable candor and introspection. Honestly, I came away liking him a lot. Also, he had embroidered towels in his bathroom. One read david’s. The other read also david’s. I’m not sure what conclusions should be drawn from that, but it’s the kind of detail that as a reporter I would feel remiss if I kept to myself.

HATER: Look, I think you’re a very talented guy. But I think there’s a core of hostility to your persona and performances that—

DAVID CROSS: —I think you’re right. And I’ve gotten that a lot. I can’t sit here and say that’s bullshit. Obviously, if enough people think that, it clearly is true. And I’ve gotten “condescending” a lot. I actually probably get that more than anything.

DC: Yeah. It’s not a good trait. I have to honestly and objectively look at it, because clearly I’m coming off that way. Even my friends, when we’re having conversations about politics, say I’m condescending. I hate being condescended to. Hostility doesn’t bother me. I am angry. I had a shitty childhood. There were a lot of ignorant people in positions of authority throughout my life. My personality is influenced by the time I spent in Roswell, Georgia. I’m also very vocal about my belief that all religion is garbage. Most of my friends are religious or at least spiritual. These are people I like and I know are intelligent. It’s this thing that I carry around. I know I’d be a better person if I was fairer, but it’s at the core of who I am and what I believe.

HTR: Here’s something you said about Eddie Izzard to the Onion A.V. Club in 1999. “He’ll bring up a kind of heady, intellectual topic and not really do much with it.… Then he gets rewarded for bringing that thing up. He’s a social satirist, a political satirist who skews American politics. But he really isn’t.”

DC: Are you saying the pot is calling the kettle black?

DC: Well, it’s one of my fears. I can see that. I think sometimes yes and sometimes no. There’s a bit of that kind of sophomoric “Fuck Bush, he’s an asshole” in my act. And that’s inexcusable.

HTR: Here’s a quote from a different interview: “You have to educate people and do it in a calm, rational way with logic and facts. You can’t just sit there and go, ‘Bush is a Nazi,’ and then expect people to go, ‘Hey, he is a Nazi.’”

DC: Oh, well, I totally agree with that. Absolutely. As far as just my stand-up is concerned, I don’t care about changing your mind. I’m not making an argument. I’m a guy doing comedy.

DC: When has your mind been changed, ever, as an adult, by a comedian? When have you ever totally thought one way, then saw a comedian—George Carlin, Jeff Foxworthy, whoever—and your mind was completely changed? Never. That’s not what I’m doing. Those are two separate things. I’ve gone on Air America a dozen times or two dozen times. I’ve done interviews on NPR. That’s not comedy. I’m not being funny. I’m having a conversation where I am using facts and explaining my rationale.

HTR: You don’t care if you come off as shrill?

DC: Not at all. I mean, I don’t want to be shrill. When I was doing that stuff, in 2000, in 2001, it was fresh and raw and unrefined. I was angry. I was dumbfounded at how predictably ignorant people were. And it made no sense to me. And that’s a lot of where the anger came from, seeing how easily manipulated people were.

HTR: I understand that you were angry, and it was a free-flowing of expression. And, I feel like a dick for saying it, but did you forget to write punch lines?

DC: What I’d say to that is that I’ve never written jokes. I mean, I’ll write things on a piece of paper and riff on them onstage. What I don’t think is fair, and what I think you’re implying, is that there’s nothing funny in it. That’s fine, that’s your opinion.

HTR: I’m not saying it’s not funny. I’m saying that it’s undernuanced at times. It could be more clever or well constructed.

DC: Yeah, probably. You can continue to craft it and hone it. But that, for better or worse, is not what I do. It might read funnier, definitely, but it would feel false. I think I could have a funnier, more economic set. But that’s the comedy I do. And I understand if people aren’t interested in it and would rather listen to someone else. But I’ll never understand the anger people have toward me.

HTR: One person you’ve managed to anger has the last name “the Cable Guy.”

DC: Well, let me say this. I’ve never met him, but I think he’s pretty much taken the high ground.

The impetus for the whole thing—what got me angry—was the posturing of “You can make fun of me all you want, but don’t mess with my fans.” A Rolling Stone journalist talked to me for, easy, ten minutes. And he did what journalists do, he picked the most inflammatory two sentences—and I still stand by them. I said Larry the Cable Guy represents dumb, anti-intellectual, easy, cheap comedy. He used what I said to appeal to his fans. He’s smart. He’s not a dumb guy. He appealed to his fans’ sense of victimization and the idea that the left thinks they’re yahoo idiots, “but y’all are the best people, salt of the earth.” He used me as a focal point for all that. I don’t hate the guy. He doesn’t anger me. I reserve hate and that kind of emotion for other things. Not Larry the Cable Guy… I haven’t listened to [my stand-up] CDs since they came out, but I believe on both of them, literally all the stuff on there, I was correct. I was right. I was right at a time when it wasn’t that popular to say that stuff. I feel vindicated in my condescension.

DC: Right. How about that? It just gets worse and worse. But I feel like there’s at least a reason for the anger.

HTR: Not to belabor a point, but that was one of the jarring things about hearing those stand-up discs. I knew the gentle, absurd humor of Mr. Show, and then there was, like, a guy ranting onstage.

DC: It probably does make it more difficult to enjoy a good laugh at someone who’s onstage, seemingly yelling at you. But I’m not yelling at the audience, I’m yelling at the world. It genuinely sucks if people are taking it that way. But I’m not talking to individuals. Where I really get the condescending stuff is when I talk about religion.

HTR: You’re an atheist. Why do you feel compelled to make that point over and over?

DC: I’d like to think that I’m not just making the point that I’m an atheist over and over—which is the conclusion you’ve made—but that I explore different facets of religion. I talk about Mormonism, Scientology, Judaism, Catholicism, and Christianity. I don’t think people realize how intrusive religion is.

HTR: Is it different when you’re behind the microphone than when you’re talking to your friends at a bar?

DC: Well, I guess that’s one thing people don’t like about me is that there isn’t a difference. I don’t make a distinction. It’s going to come off as a little preachy, because it is.

HTR: You said you have friends that are religious. Are you tolerant of their beliefs?

DC: There’s no way of bringing up religion without sounding like an asshole. I like hanging out in bars with my friends and talking politics and religion. That’s something that’s satisfying for me. I’ve had a good day when I’ve had a heated discussion.

An Interview with Mary Lynn Rajskub