An Interview with Ishmael Butler 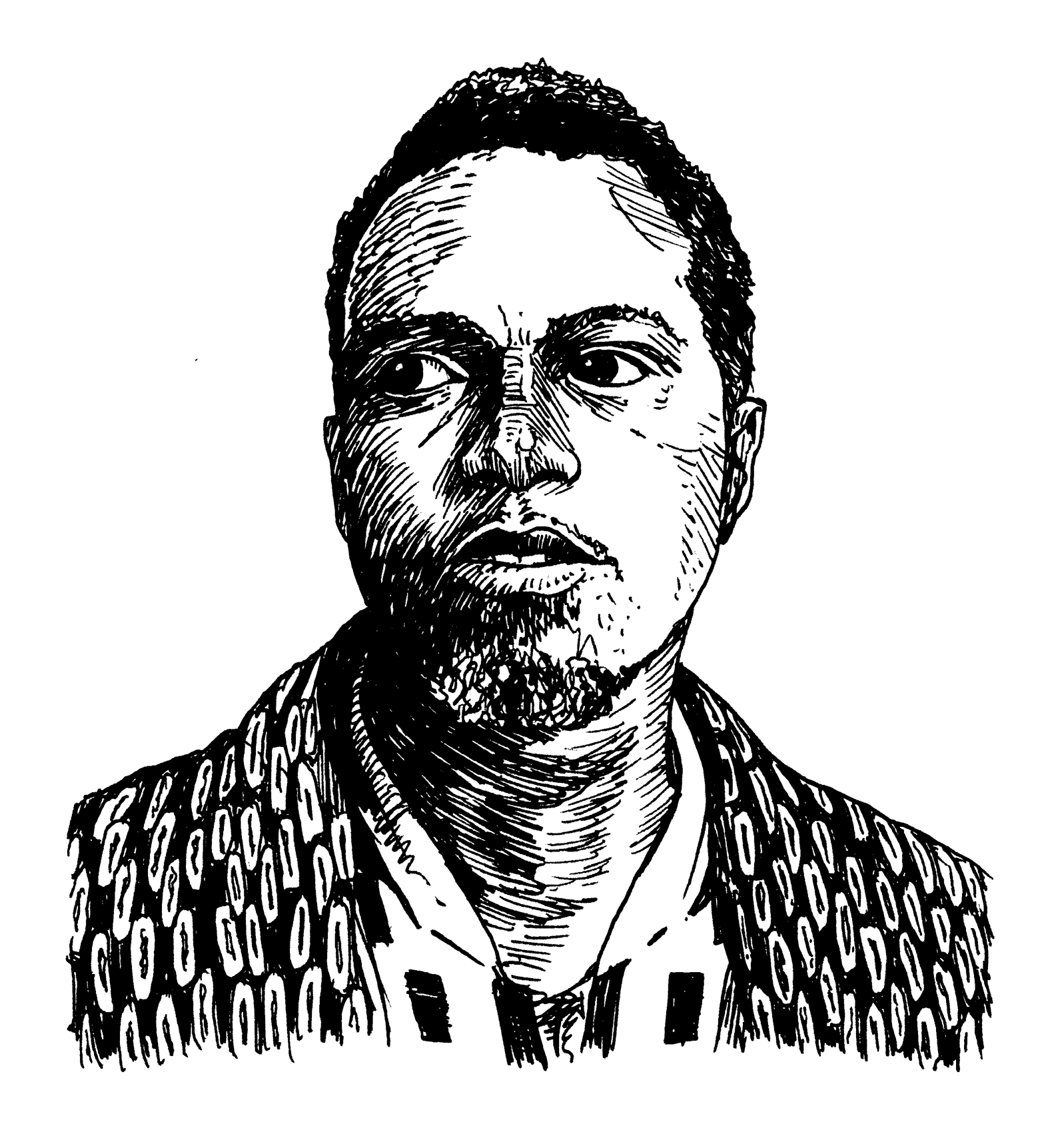 Ishmael Butler may be the world’s first “insider artist”—he’s bright, articulate, handsome, gracious, and obviously not weird, yet he creates kinetic, ecstatic, utterly cool music not from any margin. He’s been in and out of the music business since 1991, when he had his first big break under the persona “Butterfly,” playing in the jazz-inspired hip-hop trio Digable Planets. Their debut, Reachin’ (A New Refutation of Time and Space), was a commercial hit, and over the next decade he released two more Digable Planets albums, and one under the persona “Cherrywine.” Eventually, sales decreased and the band underwent multiple breakups.

After recording a solo album in 1999 that was never released, Butler went into a cocoon of privacy, dedicating himself to his family. Then, three years ago, Butler dropped off some tracks with the Seattle producer Erik Blood—to “see what he could do.” The sound on the tracks was a densely textured, electronic hip-hop art-pop; he had partnered with Tendai Maraire, who plays mbira and is the son of renowned mbira player Dumisani Maraire. Soon, their two debut EPs—recorded under the name Shabazz Palaces—began popping up in independent record stores around Seattle. The next year, they signed with Sub Pop, becoming the label’s first hip-hop act, and Black Up was released amid a solid flurry of attention, including fascinated reviews in the Los Angeles Times and on Pitchfork, earning spots on several prominent “Best of 2011” lists.

For this interview, we sat across from each other at Caffe Vita on Seattle’s Capitol Hill, not too far from where Butler lives with his kids, in the Central District, and where he spends time with THEESatisfaction, his queer neo-soul sisters and collaborators, who he helped out with vocals and sounds on their debut CD (awE naturalE, 2012). As this is being written, the bands are on tour together—a tour which began immediately after we met. As Butler spoke, he held the black, velvet-coated slipcover of Black Up, which he had brought along for the chat, rubbing his large thumbs up and down it. His manner evoked something of the 1970s, and a posh, pop-culture future just now beginning.

THE BELIEVER: You grew up in Seattle, then moved to New York to intern for Sleeping Bag [Records]. Did you enjoying working at a label?

ISHMAEL BUTLER: Yeah. I was young man, and back then—this was ’89, in New York—hip-hop was tripping. It was boss. I had ties there, I had family there, I had been going there since I was a kid, so I had a place to stay. A friend of mine had a big apartment and she used to rent out rooms to cats—mostly West Indian dudes—so she rented me a room and I lived in this really big apartment that was sectioned off. And this one cat hired me—he sold books up on Thirty-fourth Street, you know, he’d just be walking and selling books, and I was just up there doing my thing. I got the gig at Sleeping Bag—was basically just a mailroom cat, running errands and shit, but I still got the perks that everybody else got: got to be on the guest lists to the Big Daddy Kane release party, and the Nice & Smooth, and the EPMD, and it was just dope. And at that time, it was so much cheaper than it is now. Philly, D. C., Baltimore, it was all reachable spots. So we were just up and down the East Coast.

BLVR: Then you had your own thing going with Digable Planets.

IB: Yeah, that came later. I once lived in a house in Jersey City with a lot of artists—guys that ended up working with Jodeci, this R&B group that Teddy Riley used to work with called the Girls, and some of the Gap Band’s kids. We all lived in the same crib.

BLVR: Did you grow up in a house with jazz?

IB: My dad’s, yeah. His house was all jazz. My mom, no. They didn’t live together. At hers I got a lot of rhythm and blues, Motown. At my dad’s it was jazz pretty much exclusively.

BLVR: Was there a specific jazz album that made you want to create music?

IB: Not really. I kind of considered P-Funk jazzy, in their approach to things. The way that they’ve got their movements, their beats, but within that everybody’s free to do their thing. Once they got their concept going, it’s really tight. But hearing P-Funk, that’s when I really wanted to participate—when I heard that stuff.

BLVR: Filles de Kilimanjaro—that was a crucial Miles Davis record for you, right?

IB: Yeah, I didn’t like it, but I understood it. Then I realized that it’s about how far you can see into a horizon. It doesn’t matter how far the view is—it matters how good you see. I realized that art is not for you to sit back and necessarily like it, but there are other things you can understand about it that are better than other things. It just changed my approach to it all, and images just trickled down from there. And it was pretty fast, too. It only took, like, a year or so for all these things to settle into sediments of who I was.

BLVR: How familiar were you with Miles Davis when you encountered that record?

IB: Very, but it was, like, superficial. I liked a lot of stuff; I was always just enchanted by him and his look and his presence. Whenever I would see him talk and move and stuff, I was like, “Damn, he’s the guy.”

BLVR: The music critic Phil Freeman gave a paper about how there’s been this popular notion among critics that since a certain point in Miles Davis’s career, everything he’s done has been a mistake; he began dabbling in all these genres—rock and other forms. Do you think there’s been a big misunderstanding about what he was trying to accomplish by doing all those different things?

IB: First of all, a guy like that isn’t really going to make a mistake. You know what I mean? And if he does, it’s not going to be one that the average person can call out. He was a visceral cat, like so: I’m always playing my trumpet, recording, trying something. That’s his life. It’s not about successes or mistakes. I mean, just because one person says it is… but he just didn’t live his life in a uniform way like that. He’d be like, “Shit, what are you guys talking about?” I really don’t think he made a lot of mistakes. I think [experimenting] was his predisposition, and that’s what made him successful. An energetic, truthful force. Yeah, I don’t think he made any mistakes.

BLVR: Do you remember his last album, Doo-Bop?

IB: Oh yeah, produced by Easy Mo Bee. I remember that. I liked some of it. I didn’t like it that much, though. I just don’t think he spent a lot of time on it. I think they had Miles in there for, what, only a day or two?

BLVR: If you’re enjoying making music, and you’re serious about it, there’s some heavy shit. Playfulness and intensity, they can share the stage with each other, right?

IB: Yeah, it’s like, words—the older you get, you realize they’re just concepts, and they can be mixed and matched, juxtaposed. Flipped, inverted. So playfulness can be brave, know what I’m saying? Depending on how the person expresses it. Nothing is concrete, necessarily, in terms of the meaning of things. The mood of things varies, not only from person to person, but within the same person from minute to minute, however situations carry and deepen.

BLVR: I’ve heard great stories about you from local record store guys, who say you came into their place with a stack of EPs, selling them from your car. What made you handle your new music so personally at this point in your career?

IB: You know, when it was happening, it was just my instinct. Also, nothing was really popping up, so I was happy to be doing it myself. I grew up learning that unless you do it yourself, you really don’t want it. It’d been a long time since the bigger things, and I didn’t want no association with that, you know, with the new stuff. Not because I didn’t like it or respect it, it’s just that I knew that I wanted to have something that existed on its own or failed on its own. That’s what it’s really all about. I didn’t want people to feel like I was trying to say, “Hey, look at me, look what I did, now look at this new thing I did.” I just wanted the new thing to have its own life, and sink or swim on its own merit.

BLVR: Tell me about the first time you took your records in to be sold.

IB: [Laughs] I was looking in there and there was all kinds of shit they were selling! Then me and Tendai got back into the car, and I was thinking to myself, You got to grow up. You got to go through the process of whatever it is, and so I went back in and gave it to ’em.

BLVR: How did you and Tendai get together to do Shabazz?

IB: Sports. Talking about sports. We didn’t make music together for maybe the first three years of knowing each other. I hadn’t had too much experience with mbira, and I really liked that sound. I had heard it before, but I definitely never knew a cat who had one. And he really played it. I was just like, damn.

BLVR: What was the process like, making Black Up?

IB: It took three weeks. We were working on seven songs that we never even used, but we did them, since they were necessary to get to the ones that went on the album. It was almost like exercise runs. But then something happened, and I started making songs—working on two or three every day. It happened fast.

BLVR: I know you get asked a lot about the three musical personas you’ve had—

IB: I mean, the name they give you when you’re born… they give you a name. One name. It’s cool and everything, but you might not want to hold it. You know, you feel other ways. If I feel a way to make something different, I call myself the way that I feel. Again, the ideas in the music are just happening to me. I’ve started realizing that much more. I realized that the person that I am—the specialness is that I’ve been chosen to be a person who can feel these things that are coming and do something about it. But it’s not really me. It’s a divine thing. The mask takes the face out of it, and it becomes about what the body is doing—the mind, rather than the look of this person. The masks represent everybody. I just didn’t feel like it was about me anymore. To me, the music’s really to be given away, not necessarily sold. All this industry that’s built up around it is subsequent to what it’s really about. But you still have to represent the music, work on behalf of it, because it happened, and it deserves a lot.

The Possibility of the Search