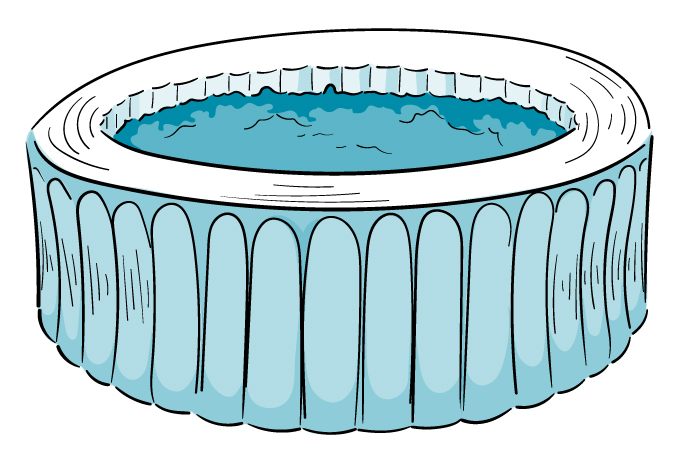 I never need to check the Farmers’ Almanac to know when the seasons are about to change, because the bugs in our house tell me. Early spring brings plump and nosy carpenter bees to root around the untreated wood of our eighty-three-year-old porch pillars; each summer, pinprick-sized ants hitchhike inside on the waxy skin of the novelty peppers my husband loves to grow. Autumn is signaled by wasps half-drunk on fallen apples, stumbling around the window ledges—I don’t know where they come from—woozily brandishing their stingers in a way that’s more resigned than threatening. The bugs don’t bother me (after all, when you live in a farmhouse that’s stood as long as ours has, they probably have a greater claim to ownership than we do). It’s the season when the bugs don’t show up that’s the hardest: winter.

Our first cold snap in an old house that seems like a living, breathing organism brought with it a lot of realizations (just like a person, a house has warm spots and freezing spots, can be moody and uncooperative), one of which was the need to create an oasis within the house that felt, well, like an escape from it. This being rural Kentucky, there was only one route to go. We needed a hot tub.

Drive down any switchback between Crab Orchard and Bee Lick and you’ll find dozens of yard signs for hot tub repair services popping up out of drainage ditches and along fencerows: tiny roadside placards that establish the fact that tons of rural Kentuckians own hot tubs—and that the tubs malfunction a lot. We didn’t quite have the resources to pony up for the kind of la-di-da personal cauldron that has molded plastic seats that contour to the small of your back, mood-setting underwater lights, and that can cost as much as a nice used car, so we settled for what was in our price range: a $349 inflatable hot tub from Walmart.

Unfurled from its box, the hot tub looked more like a limp pile of kudzu-green rubber than an in-home reprieve, but as it filled with air like a giant water wing in our concrete, cobweb-covered basement, our anticipation rose along with it. Soon, a fully formed, extremely buoyant vat of pleasure stood in front of us, and we dragged the garden hose through the cellar door to fill it with whatever kind of non-pH-balanced H2O was flowing from the spout. Soon, I thought, we’ll have a sliver of luxury to call our very own amid the depressed wasps and drafty fireplaces of our temperamental home.

But it wasn’t that easy. A few days later, the hot tub’s thermostat finally read one hundred degrees—not quite peak level for melting or relaxing, but close enough for our antsy brains—and we slithered in for the first time (fully nude because, hey, it’s our house). Neither my husband nor I are of very large stature, and what soon became painfully apparent is that without those fancy-pants hot tub seats, we were up to our chins in gurgling water, our bare asses trying to find stability on a squishy hot tub floor that acted like a child’s bouncy castle, boinging us up and down in rhythm with the weak jets.

The second obvious point of gloom about the hot tub was the surroundings. The views in our former coal cellar basement left something to be desired: a dryer that needed a new fuse, a stack of seen-better-days suitcases, a trail of PVC pipe running along the wall that the previous owner, Bud, had installed as a way to ferry water to a friend’s RV that stayed parked in the yard. These were no misty-morning mountain views, for sure, but we were committed to our attempted luxury in the bullheaded way those of us from eastern Kentucky are raised: we keep at something until it kills us or we kill it.

What finally broke our spirit was the same thing that had driven us to buy the hot tub in the first place: the cold. On Christmas Eve, the water finally reached 102 degrees—primo hot tub temperature—and we spent the evening scrambling up and down the subterranean stairs, between watching Christmas at Pee-wee’s Playhouse above and soaking in the tub with a bottle of wine from Walgreens below, ignoring the fact that our feet were covered in a fine film of basement dirt like sparrows fresh from a dust bath.

The next day, though, was sobering. The hot tub began to reject our bodies like pathogens, shutting down, seemingly in an effort to force us out. Each time we clocked that the water had reached an acceptable temperature, we’d plunk ourselves in—and the numbers on the thermometer would plummet. In a matter of minutes, our body temperature and the water temperature would match, creating the kind of bone-chilling homeostasis that left us scrambling out for our towels. With that, we let it win.

The Craigslist posting for our hot tub went up at 9 a.m. on a Tuesday morning, and by 9:08, we had a buyer. We scooped out the now-murky water with ten-gallon buckets into the basement’s industrial-sized sink, and with each sploshing sound, a little bit of the emotional water we’d taken on was thrown out. The hot tub’s future owner soon arrived from London (Kentucky) to collect what he called “a steal of a deal!” and to thank us profusely, despite our light warnings that it might not be, you know, wholly functional.

But no matter. We’ll cover ourselves in quilts to keep out the cold this winter, waiting for the first sign of the carpenter bees’ return. And if the hot tub breaks on its new owner—and he wants it to work badly enough—he’s only a yard sign away from someone he can call to come try to fix it.

A Coming of Age Reading Checklist