Puppet Films and Tinny Sounds, An Interview with Marcel Dzama 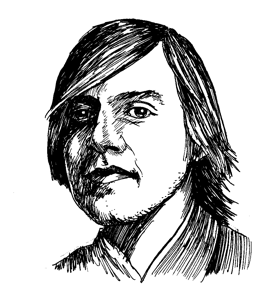 Inserted into this issue is an exclusive 7-inch record adorned with art by Marcel Dzama. It serves as the soundtrack to Dzama’s film, Une danse des bouffons, which features music from, among other musicians, Dzama and Will Butler of Arcade Fire. Butler and Dzama sat down to talk about the record, the film—which will be at the David Zwirner Gallery this September—and playing in cover bands.

WILL BUTLER: Where did you get the music for Une danse des bouffons?

MARCEL DZAMA: This lovely group of my friends happened to be musicians, and I asked them if they would be interested in doing a soundtrack, and, very luckily, they were. And you are one of them. So thank you for that.

WB: You seem to work a lot with ballerinas.

MD: I was finding that living in New York, I was drawing more claustrophobic things, and I wanted to put some order to it, and making it a large dance performance kind of put order to the chaos of all these characters. So after that I started to look at ballet as actually an influence. Before that, I didn’t know anything about dance.

WB: And now the dancers have taken on a life of their own. You’ve also done a few films that are dance-based.

MD: In the 1990s I used to make these short films that were puppet-related. I never had real actors, so I just made costumes. Once I moved to New York in 2007, I was asked to do a music video for this band, Department of Eagles. That’s how it all started.

WB: Back in high school, you played in bands while you were making art. How separate are those worlds in your brain?

MD: They definitely interacted with each other. My high-school bands were mostly cover bands with a few original songs. In college it was original songs. I would make these cassette tapes and sell them on consignment and in record stores. There was this brand of chips called Old Dutch, which my family ate a lot of, and I used to turn the box inside out and draw on the box the name of the band and do a drawing on it, and put a cassette of new songs in, and then have a baggie full of weird photos that I had taken and mutilated Star Wars toys. So you’d have this surprise box that you’d get with the music.

WB: My brother, Win, started the Arcade Fire. I was in some of the proto–Arcade Fire bands when he was in college. I was basically a sideman. I wasn’t super into rock-and-roll music until late in high school, when Win was into the Smiths and the Cure, and I was the right age for it. I was sixteen or seventeen, so I didn’t really have the high-school band experience. I was listening to classical music and I was into the Magnetic Fields. I remember trying to learn all the Magnetic Fields’ songs, but they’re all just three chords. Then in college I just played in ’80s cover bands, basically.

MD: Were you classically trained?

WB: No, I took lessons as a kid. And only recently have I begun to self-identify as a musician. I still just think of myself as someone who’s involved with the arts. Until maybe eighteen months ago, I didn’t think I was a musician. I always thought of Arcade Fire as a theater project or an arts project because you’re making costumes, and you’re staging things, and you doing all this stuff that I never thought of as music. But now I think of myself as a musician, and now Tim Kingsbury and Jeremy Gara and Richard Parry and I in the Arcade Fire have started a cover band because we realized we were musicians. Like, “Oh, let’s just play music.” They are not, coincidentally, the people who soundtracked your film. It’s kind of an experiment in just purely focusing on sound as our medium.

MD: And you do have a favorite cover song with them?

WB: We do a really good “You Ain’t Goin’ Nowhere,” the song by the Byrds.

WB: When did you start making films?

MD: I made films quite early, starting in the mid-’80s. My parents bought me a Fisher-Price camera that let you film on cassette tapes, so it could look like old black-and-white films, and I used to make these puppet films and show them to my little sister, who is ten years younger than I am, so she was entertained by them no matter what it was.

WB: Was there sound on those?

MD: Yeah, there was audio. It would record a really hot, tinny kind of sound. And I figured out that if I took out the audio from that and just plugged in a soundtrack from my stereo and played it on top of it, it made it a much more real film. I’d make these weird art movies as well, because it instantly looked like an art movie. It was black and white, so it felt like a 1920s—

WB: With the soundtrack from the get-go?

MD: I usually would have a soundtrack from some movie I was into, like maybe the early Batman soundtrack or just something I found at a thrift store, and then later, when I started doing music, I would make my own songs and put them on top of things. And then later I discovered that I could just take things from television and collage them and put in my own music. That was even easier than making films.

WB: So we talked about how you got into dance film in general. How did Une danse des bouffons come about?

MD: The Toronto Film Festival asked if I would make a short for them. I had a few ideas and costumes that I had done in a few of my drawings and sculptures, and I wanted to tie it all together with a film. It had a theme of artworks coming to life, works that have meant a lot to me, like Marcel Duchamp’s Étant donnés and Francis Picabia’s Adoration of the Calf or Erwin Blumenfeld’s photo Dictator. And there’s a Goya reference in there as well. And Joseph Beuys.

MD: It was such an honor to work with Kim. She was brilliant. How was your experience recording the soundtrack for Spike Jonze’s film Her, which you were nominated for?

WB: Our Oscar-losing score for Her. It was very different. It’s also hard when you’re working on a talkie, because the music is so subservient to the dialogue, particularly in a movie, like Her, with an Oscar-winning screenplay, where it’s all dialogue because one of the characters isn’t on-screen. So the music had to play this subservient role, as opposed to in a short silent movie with lots of jokes in it. You could be a little broader, and it’s hard to compare that, but it was still very hands-on working with Spike. I mean, he wasn’t literally playing the mandolin or anything, but he was in the studio with us while we were working on it, which is hard. It’s a lot more intense when you have so many creative minds. I mean, with you, when you’re directing a film, how do you manage the director of photography, the choreographer, the costumer? You didn’t come up through the Hollywood system. How does that compare to sitting in a room by yourself and drawing?

MD: Yeah, it really takes me outside of my element, because I’m not really a social person in general, and I really find it hard telling other people what to do.

WB: Do you enjoy that process, the music-video process?

MD: Yeah, especially if there is a budget.

WB: Because I’m on the other side of that equation, where we’re looking at budgets, and it’s really hard because it costs money to make something good. Anything good costs a million dollars. Like, that’s great, it’s easy, it’s beautiful, but it’ll cost a million dollars. Oh, never mind, I guess I don’t need more beauty in this world.

An Interview with Benjamin Wiessman

An Interview with Kari Steffanson M.D.