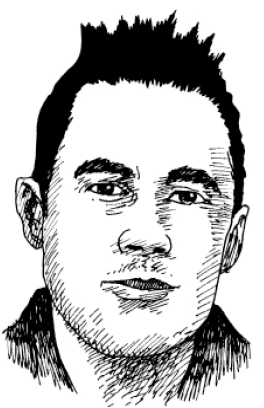 In the band Vampire Weekend, Rostam Batmanglij wore the hats of guitarist, keyboard player, singer, lyricist, composer, and producer. He had a natural inclination toward warm synth tones, crisp drums, and string-laden musical passages—a lush production style that has continued in his work with a variety of artists, including Carly Rae Jepsen, Frank Ocean, and Haim. In 2016, Batmanglij left Vampire Weekend, and eighteen months later he released a solo album, Half-Light.

I spoke with Rostam by phone to discuss the album’s single, “Gwan,” which has a similar aesthetic to that of his previous work but is somehow more romantic and ultimately transporting than anything else he’s recorded. Thoughtful and affable, Rostam illuminated the long, unexpected creation of the track, even when he didn’t directly address my questions.

The Believer: Do you remember where you were when the first kernel of the song entered your head?

ROSTAM BATMANGLIJ: I remember specifically pushing myself just to write some string music, or music for a string quartet. I wanted to write something that could stand up on its own, and something that would be intriguing to my ears, musically. I was interested in taking some of these kind of repeated patterns that you hear in minimalist music from downtown New York in the ’60s. I was trying to come at it from that angle of, like, Irish music.

RB: [Laughs] Well, to be honest, I started writing that string music in, like, 2010. So for me, it’s hard to know exactly what was inspiring me. I guess I grew up going to school and learning a bunch of folk songs without knowing their origins. I started getting interested in what the origins of those folk songs that I learned by heart were. But yeah, I never studied Irish music formally. I guess to me there’s this divide between music I’ve studied academically and music I’ve studied independently. One of the things I’m trying to do as Rostam is bridge those two worlds.

The music I studied when I was in college has things like imitative counterpoint, whereas popular music and pop songs—and folk songs, even—rarely have imitative counterpoint. There are two folk melodies that appear in “Gwan.” One is from “Suo Gân,” which is a Welsh lullaby, and the other is from “Simple Gifts,” which is a Shaker hymn, and which was also adapted into a Christmas song called “Lord of the Dance.” One of the things I think about with regard to those folk melodies is where do they come from? Do they evolve over time? Is there something about those melodies that is especially sturdy as a result of being passed down through generations and surviving?

BLVR: I mean, Half-Light is really where you’re stepping into your own creativity and your own self as an artist in a fully realized way, right?

RB: You know, I can’t really agree with you, because I feel like when I produce a song, it’s not me realizing my creative potential. I do see being a producer as the zenith of creativity, so it’s hard for me to want to say that the music I make as Rostam is somehow more creative than when I’m working as a producer. I gotta say that I don’t feel there’s a divide there.

BLVR: What, then, would you say is the difference between you as yourself—as Rostam, as a performer and songwriter—and you as a producer, when you are collaborating with people but are not fully in control of a song?

RB: I don’t think control is the defining difference. Every collaborative relationship is unique, and I think as soon as you’re starting to talk about control, you’re very far away from a successful collaboration. There have been times when I’ve contributed to a song—not the lyrics or the melody or the chords—mostly just the drums, but to me that is as meaningful and emotional as the lyrics and chords. I don’t feel like there’s such a huge difference. Ultimately, I have to say, I do care about all the elements that go into a song, but I feel like the hierarchy that’s created—which, you know, puts the lyrics at the forefront of meaning in a song—I think it’s a false hierarchy. Furthermore, I would say there’s a similar hierarchy that people use to put melody on a pedestal. I’ve actually gotten into arguments with other friends who write songs when I say I don’t think melody’s actually important. There are a lot of songs I love that don’t have any melody to them.

BLVR: You mentioned earlier that you started this with the strings.

RB: Yes, not only with me writing the strings, but with me recording the strings. I had this recording, and it stayed in my hard drive for years, and I knew that I wanted to make it a song, but it wasn’t a song. So then I started to think about, you know, how do I make this a song? The first step toward getting there was to put chords underneath the strings, so that the chords would change under the repeated patterns in the strings. I did that by adding a bass line, basically. A bass line that would change the chords underneath what was going on.

BLVR: So you’ve been slowly piecing this record together over a long period of time, then.

RB: Yeah, for sure. My entire career as a producer, having produced almost a hundred songs—it’s very rare that the recording session that starts the song isn’t also the final Pro Tools session. It begins as a series of tracks that are recorded. From there you can add, you can take away, and you might not end up with any of the same tracks you started with, but there is some through-line through the process of recording.

So it [“Gwan”] started with a string arrangement. Then I had my friend Hamilton Berry, the cellist, come in and record all the string parts on the cello. So even though I wrote them for a string quartet, he was able to play them all on the cello. So pretty much all of the strings you hear on “Gwan” are cello. Then from there I had a handful of melodies for the verse of the song, and I had a couple of lyrics, and I brought in my friend Ramesh Srivastava, who’s in a band called Voxtrot. He’s someone I’ve known for years, and I told him that I had kind of gotten to this point where I was stuck on the song, and I wondered if he and I could work on this a little bit together. He helped me break out of my block, and he made me realize there were some lyrics I’d written that I loved, and helped me write some more lyrics. Together we wrote a chorus for the song. I think that was a breaking point.

I sat with it for a while, and I took some time and realized that maybe the chorus had some things I liked, and maybe some things I wanted to change. So I sat down at the piano and started playing the chords just on piano and singing by myself. I simplified what Ramesh and I came up with, and then I recorded that.

Then I started to feel like the song needed one more section. That’s when I wrote “And when I woke up from that dream,” which I guess you’d call the coda of the song.

BLVR: This was a very personal record for you, and as a debut artist, I can’t imagine it must have been easy to be so revealing.

RB: I guess I felt like I did want on this album, for better or worse, to kind of convey a mood of just waking up, or curling up in bed, and trying to convey that vocally. I had friends that told me they thought I should rethink some things, which I did. But other times I just kind of fell in love with a first take because it had a certain magic to it, and I felt like it was conveying this emotion that would be impossible to re-create.

Mostly the vocals are first takes. A bunch of them are doubled. I guess I was interested in trying to capture a home recording from the 1970s, where a songwriter just kind of has a tape machine with a handful of tracks and is just trying to get an idea down. There’s something to me that’s appealing about that aesthetic.

BLVR: How did you work on the rhythm for the song?

RB: Well, I feel like I always have drums in my mind, whenever I’m listening to anything. If I’m listening to music with drums, I think about the drums in the song. If I’m listening to music without drums, I’m thinking about what the drums could be. It’s something that’s always on my mind. I think that’s something that unites a lot of producers: that we’re always considering what drums could do in a song. You have a physical response to drums. You feel the thump of a kick drum in your chest. You get excited by the sizzle of a high hat. You can feel a groove from the snare drum. And I think that you can translate emotion through the drum patterns you hear in your mind as a producer.

On the chorus of the song, I really tried to think about what someone like Tom Petty would do. I love that so many of his choruses are very simple sentiments, very simple words, drums, and melodies. That’s where I was coming at it from a songwriting perspective. I think Tom Petty wrote choruses that are confident enough to be simple. I think that’s something to strive for.

BLVR: Is that something you’re aiming for with everything you do, or does it particularly pertain to you as Rostam the recording artist and performer?

RB: I think it is something that I strive to do. I think there’s something very bold about music that’s minimal and songwriting that’s simple. There’s this line between simple and simplistic. I think you can say that the chorus “And I’m free, free-falling” is a simple idea, but I don’t think you can say it’s simplistic, because there’s an openness in how you can interpret that idea of free-falling.

BLVR: Ultimately, “Gwan” is impressionistic. Did working with Frank Ocean, who is similarly low-key in his work, inspire this approach?

RB: It’s interesting that you mention Frank, because he was someone who came to me as a fan of my work, and specifically my songwriting, because one of the first times we ever hung out, he told me how much he loved the song “Diplomat’s Son.” So there’s definitely a mutual admiration and mutual love that led us to work together.

In terms of style, for me it’s something that develops over the course of years and years and years. I’ve been writing songs in some form since I was fourteen, so that’s a good twenty years. [Laughs]

BLVR: It feels like there is a theme throughout your work, which is this feeling of reveling in life, of being humbled by the world.

RB: I see music and songs as a place to experience warmth. Ultimately, that is what I’m trying to share. I think even the album title Half-Light is connected to this idea of warmth. The warmth of the sun at its lowest angle.