An Interview with Phoebe Gloeckner 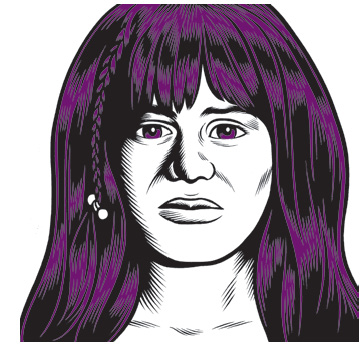 Phoebe Gloeckner is an acclaimed author, illustrator, and comic book artist. Her works are best known for their unflinching depictions of teenage life, often featuring themes of abuse, addiction, and sexuality.

Her 2002 graphic novel, The Diary of a Teenage Girl, was adapted into a critically acclaimed film in 2015. In this exclusive interview, Gloeckner discusses her creative process and the power of visual storytelling.

Gloeckner’s approach to creating her art is highly intuitive and non-linear. In fact, she often begins her work without a specific intention or concept, allowing the work to progress organically according to the artist’s own creative urges.

This process of letting go and allowing the work to develop on its own accord seems to be a crucial aspect of Gloeckner’s creative process.

Gloeckner believes that employing a more structured approach to making art can inhibit one’s ability to tap into one’s own creative impulses. She finds that being too rigid in one’s decision-making can stifle the free-flowing nature of creativity.

Through this less rigid approach to making art, Gloeckner believes that one can tap into the id, a primitive, instinctual part of the psyche that is the source of our most powerful creative urges and urges.

This central aspect of Gloeckner’s creative process reflects Freud’s psychoanalytic theory of the id, which he defined as the part of the human psyche that is driven by instinctual and impulsive desires.

The id is in contrast to the ego, which is the part of the psyche that is in touch with reality and can be reasoned with.

The Diary of a Teenage Girl is Gloeckner’s most well-known work, and has garnered significant attention for its unflinching depictions of teenage sexuality and the struggles of growing up female in the 1960s.

Gloeckner’s work is largely influenced by her own teenage experience, though she also incorporates aspects of her mother’s adolescence as well. Gloeckner depicts teenage life as both fraught with great potential and fraught with great danger.

She presents a nuanced and multifaceted view of teenage life, recognizing the beauty and potential of youth while also acknowledging its dark and dangerous aspects.

Gloeckner’s nuanced and honest approach to teenage life is rooted in her own experience growing up.

As a teenager, Gloeckner dealt with her own sexuality, struggling with her identity and finding her place in the world.

She feels lucky to have come of age in the 1960s, as she was able to explore her own sexuality and identity with a freedom and lack of shame that was not present in earlier decades.

Gloeckner’s Journey as a Working Artist

Gloeckner has been making art since childhood, and describes her early work as “sort of dumb drawings of girls.” After studying art in college, Gloeckner worked as a sign painter and cartoonist while also creating her own artwork on the side.

She was finally able to make her living as an artist after publishing The Diary of a Teenage Girl, which was her first full-length graphic novel.

Gloeckner was able to successfully publish The Diary of a Teenage Girl thanks to her previous work as a cartoonist and sign painter, which allowed her to finance the project through savings.

Gloeckner also credits her long-time friend and fellow artist, Sharon Short, with being instrumental in getting The Diary of a Teenage Girl published. Short pushed Gloeckner to submit her work to publishers, encouraging her to persevere despite rejection.

Short’s support and encouragement helped Gloeckner finally get The Diary of a Teenage Girl published, catapulting Gloeckner to fame as an artist.

Gloeckner believes that comics are the most visual and literal form of storytelling. This notion is evident in the way that Gloeckner composes her work, often utilizing the visual medium to explore themes of sexuality and repression.

In The Diary of a Teenage Girl, Gloeckner uses imagery and visual language to explore the themes of repression and sexuality that are central to the work. In one panel, Minnie is depicted squashing a spider, which serves as a metaphor for repressing her own sexuality and desires.

In another panel, Minnie is shown wearing a t-shirt that reads “No Fear,” which represents her attempt to be confident and assertive in the face of her mother’s oppressive and conservative outlook.

These panels demonstrate how Gloeckner utilizes the visual medium to explore themes of sexuality and repression and how comics are a particularly potent form of visual storytelling.

Gloeckner also believes that being true to one’s vision is crucial in navigating the art world, as she believes that the industry would like to “homogenize” artistic voices to make them more marketable.

Gloeckner believes that it is important to follow one’s instincts and pursue those artistic impulses that feel authentic and true to oneself.

While doing so, one must also be willing to accept the consequences that come with being true to one’s vision. Doing so is not only necessary for being an artist, but also a way of respecting the work.

Gloeckner’s Perspective on the Craft of Making Art

Gloeckner views the making of art as a form of self-exploration, allowing one to confront and deal with unresolved issues in one’s life.

She believes that making art can be a very personal and cathartic experience, allowing one to work through their own emotions and issues in a safe and creative environment.

While making art can be a deeply personal and therapeutic experience, Gloeckner cautions against taking it too seriously. She believes that making art should be fun and playful; that it should be enjoyable and lighthearted, lest it become too burdensome and stressful.

Gloeckner’s approach to creating art reflects her belief that the best art comes from a place of genuine enjoyment and passion, as opposed to a place of self-seriousness and anxiety.

Gloeckner’s creative process reflects her desire to allow her work to develop on its own accord, tapping into the id and employing a less rigid approach to making art.

Her honest and nuanced depiction of teenage life is rooted in her own experience growing up and her approach to making art reflects her desire to remain true to her vision and enjoy making art.

Gloeckner’s wisdom and insight offers a unique perspective on the craft of making art and the importance of being true to oneself.

Nutrition is a Force Multiplier: The Poison Berry