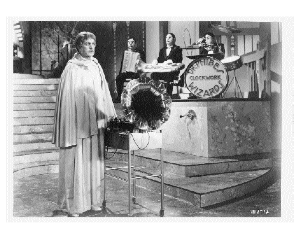 In 1971’s horror classic The Abominable Dr. Phibes, Vincent Price stars as a dead in­ventor who drinks champagne by pouring it into a speaker jack in the side of his neck. He looks like Captain Kangaroo with a hangover and is somewhat of a romantic, em­balming his wife and preserving a sense of humor de­spite losing his face and voice box in a car crash. Phibes plays an orange Wurlitzer organ, cuts a fox-trot to his robot jazz trio (the Clockwork Wizards), and speaks through a golden art-deco Victrola plugged into his neck. “As you see and can hear,” he says, “I have used my knowledge of music and acoustics to re-create my voice.”

The Phibes socket appeared to be a modified fis­tula, the site of larynx extirpation for victims of throat cancer. It is a hole where a hole should never be, and Philip Morris would rather it not appear on television ads, much less the Marlboro Man’s gizzard.

Phibes’ DIY voice box was unique (if not insane) in that it was electronic and could still take a slug of Moët. The actual history of synthetic larynges claims inventions no less bizarre, many of which are German-made, with sources of inspiration ranging from balloon reeds and woodwinds to one patient who’d created his own fistula with a hot ice pick.

In 1870, Dr. V. Czerny was installing artificial ­larynges in canines, with dubious results (“The dog could yawn and make some noises”). In 1913, Dr. T. Gluck wrote of an underarm accordion bellows that plugged into the nasopharynx. More Phibesian would be Gluck’s motorized gramophone purse, which was wired to a denture plate (with tongue-flicked pitch control) and allowed patients to channel their favorite singer, a form of lip-synch by necessity.

Gluck’s experiments in “phonetik surgery” in­formed the research of Bonn University philologist Werner Meyer-Eppler, deemed by vacuum-tube nerds as one of the godfathers of electronic music, largely due to his postwar advocacy of a Bell Labs speech analyzer called the Vocoder. (Vocoder inventor Homer Dudley had already built a pneumatic reed larynx in the early 1920s.) As transistors grew more prominent, Meyer-Eppler developed an ElectroLarynx and published essays like “Ob­servations During the Re­tarded Feedback of the Language.” In 1956, the U.S. government ordered AT&T to construct its own ElectroLarynx as well as research underwater acoustics for the military. By 1959, Bell Labs had unveiled what appeared to be a Right Guard can with a vibrating diaphragm. It had a pitch-shifter for inflection; though providing cordless communication, its persistent buzz seemed to indicate the presence of an invisible barber. According to Bell Labs, the ElectroLarynx was most effective when used over the phone.

In 1964, as chain-smoking Robert Oppenheimer battled still­-undiagnosed throat cancer and Hiroshima survivors faced thyroid tumors, Smithsonian Folkways released the album Speech After the Removal of the Larynx, hosted by Dr. H.A.E. van Dishoeck, an expert in psychogenic deafness and house-dust allergies. Included was a recording of the Italian-made Pipa di Tichioni, a pipe equipped with a pitch button and a transducer in its bowl, as if one were giving the illusion of smoking while speaking in a weed-eater tone that served as its own surgeon’s warning. Nonprosthetic examples were captured as well, the most difficult being a subglottic air-suck technique known as “Frog Speech,” which suggests the gulch gasp heard on a 1975 Kraftwerk song called “Radio Stars.” (This device is referred to in some circles as “the Toadcoder.”)

More recent advancements in prosthetic larynxes would allow Chief Justice William Rehnquist to inaugurate our forty-third president in 2004. That’s a man without a windpipe swearing in a man who spent his administration talking out of the side of his neck. The occasion didn’t call for champagne as things had already gone down the hatch.

An Interview with Bob Mould

Billboard on the Idaho-Montana Border