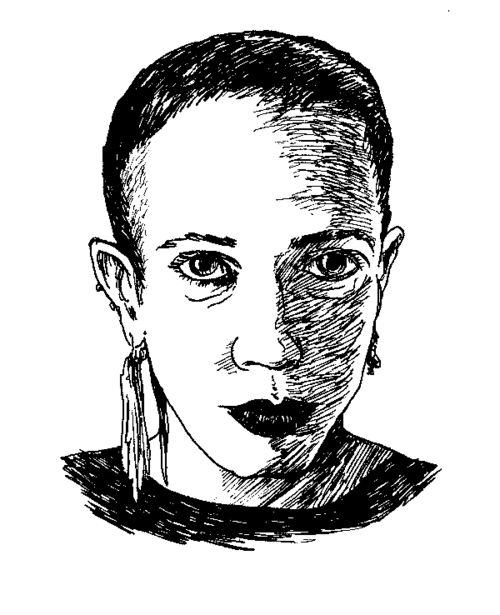 The following is an excerpt from Chris Kraus’s essay on Kathy Acker, available in full on Believermag.com

Kathy Acker died of cancer on November 30, 1997, the same year that her older contemporaries William S. Burroughs and Allen Ginsberg passed away. At the time, many observed that these three deaths marked the “end of the avant-garde”—or, at least, the end of the avant-garde as it was known in the twentieth century.

In the years succeeding her death at age fifty, Acker’s work has been the subject of a documentary film, a symposium, and several scholarly works. Attention has mostly been focused on her as an exemplar of the “transgressive” genre of writing, performance, and art popular in the 1980s. Promoting herself more as a rock star than as a writer, she appears in numerous studio portraits taken during that era posed as a precocious child whore in a Victorian boudoir, displaying her extravagant tattoos and bulked-up biceps. Although she’d been actively writing and publishing in the East and West Coast art world and poetry communities since the early 1970s, it was not until the mid-’80s that her work was presented commercially. When her inventive, aggressive bricolage novel Blood and Guts in High School was reissued by Picador in London in 1984, she was hailed as “the high priestess of punk,” an avatar of resistance to the grim resignation of the Bush/Thatcher era. As her image solidified, so did her writing. While the writings that built Acker’s reputation are insouciant samplings of pornography, plagiarized classics, confessional memoir, and political satire, she began taking herself even more seriously than her fans and critics did. From the late ’80s onward, she adopted a somber high-modernist style, identifying herself as a postmodern poète maudit.

While Acker’s work has retained its underground cred during the seventeen years since her death, it’s only recently that her work has been embraced as a powerful influence on a new generation of (mostly female) contemporary writers. Her appropriating compositional style prefigures the oft-debated narrative strategies of writers whose recent novels are littered with emails, transcribed conversations, text messages, found conversations, and diary entries (as if a disjunctive narrative style had never been used before the advent of digital media). In a recent informal survey of Acker’s female contemporaries conducted by Emily Gould and Ruth Curry of Emily Books, an indie e-bookstore, Acker’s name recurs as a primary influence. Her image has faded but her writing remains vivid. This shift makes Semiotext(e)’s publication of Acker’s 1995 email correspondence with media theorist McKenzie Wark extremely well timed.

I’m Very Into You is a collection that includes 103 pages of emails that Acker and Ken Wark exchanged over seventeen days at the dawn of the internet era. Acker met Wark in Sydney during the summer of 1995, and the two had a brief but intense affair before she returned home to San Francisco. Wark, now a professor at the New School for Social Research and a renowned media theorist, was thirty-four when he met Acker (she was forty-eight). At the time, Wark was part of a Melbourne-based post-Marxist anarchist group that produced the political and cultural journal Arena. He had just published his first book, Virtual Geography, about the emergence of global media space and the transmission of world events as media spectacles. He was enjoying a precocious career as a national media commentator in Australia and advising government ministers on media access, while still living a kind of post-student life among artists and activists. He had boyfriends and girlfriends, often concurrently, and wondered about his identity, queerness and straightness, performance, butch/femme-ness, masculinity. Of course he’d read Acker. He’d been following her work since the ’80s.

The search for connection through sex is at the forefront of all of Acker’s writing. She was single for most of her life (and writing always from within her life, and around and beyond it). As passages from her novels show, on-tour flirtations and hookups and romances weren’t uncommon. While touring in the summer of 1995, something more compelling than a mere fling developed between her and Wark. His first email begins as a gracious note sent to a casual lover. He’d driven to work the next day in a daze; he’d enjoyed spending time with her and was starting to read the William S. Burroughs novel she’d talked about. But as he continues, he opens the door to something more complicated: “There are no words,” he writes. “I just want to say there are no words.… Bear with me. I’ll have something to say for myself sometime soon. When I remember who I thought I was in the first place. Even if I’ve been displaced a little from wherever that was.” She responds, delighted: through the exhaustion and jet lag of travel, “your message is changing the day… all the time there (in Sydney) that I didn’t know what was going on… what becomes/became present was how easy it is to be with you. Like: you are the one I want/wanted to talk to.”

In London, at the height of her fame, Acker had been involved in an increasingly maddening long-distance BDSM romance with a married journalist referred to as “the German” and “the reporter” in her 1990 novel, In Memoriam to Identity. “Being with him made me remember that I’ve always looked for my childhood,” she’d write to Wark. Still, his control of her, which began as sexual play, became increasingly total as he suspended contact for weeks and cut short their meetings. What began as a fulfilling and sexy relationship between her “bratty sub” and his “strict Dominant” evolved into a draining, old-fashioned affair between a distant and married straight man and his long-suffering mistress. As she’d write at the height of her correspondence with Wark, fearing their friendship might take a turn in that direction: “So. Regarding het shit. These games. To me, top/bottom is just stuff that happens in bed. Who fistfucks whom. Outside the bed, I do my work and you do yours. I fucking hate power games outside the bed and have no interest in playing them.”

By the time she met Wark, Acker’s life had been in semi-tumultuous transition for years. Acker broke off relations with the German reporter in the late ’80s. Living alone in London and trying to finish In Memoriam to Identity, she found herself caught in a holding pattern. Then, in the summer of 1989, her relations with her UK agent and publisher exploded. The Adult Life of Toulouse Lautrec, one of Acker’s earliest self-published works, had just been repackaged and republished as Young Lust with a photo of Acker’s tattooed naked back on the cover. Like all Acker’s works, Lautrec was composed partly by sampling the language and plots of existing high and low literature. This particular work included several pages of a novel called The Pirate, by mass-market soft-porn pioneer Harold Robbins. When Robbins’s lawyer, Paul Gitlin, sent an injunction in an effort to pump up his elderly client’s fading career, Acker’s publisher took the threat seriously. Following instructions from management, her editor demanded she write a public apology. (Robbins himself had been threatened with a lawsuit in 1974 by a “Miss X,” who believed the adventures ofThe Pirate’s promiscuous protagonist, Jordana, were based on events from her own history.)

“The Harold Robbins Affair,” as her American editor, Fred Jordan, wryly described it, would become Acker’s official reason for leaving London. As she told Larry McCaffery, “[I]t was a horrendous experience that completely disrupted my life. I couldn’t even answer my phone for three weeks… I just had to get out of the country… I was also feeling very threatened as a writer.”

From London, she returned to New York, where she’d lived from 1975 to 1983, and bought an apartment downtown, between the East and West Villages. By 1990, many of her old East Village friends and associates had moved on to literary careers supported by mainstream publishers. Lynne Tillman’s well-received debut novel, Haunted Houses, had been published by Simon & Schuster in 1987; Patrick McGrath’s new-gothic novel The Grotesque had been published by Simon & Schuster in 1989. Critics discussed the books of Acker’s former peers, not their piercings and outfits. She found New York lonely and isolating.

Within months, she put her apartment on the market and returned to London, but then changed her mind and left London for San Francisco. Seeking a place within walking distance of nature, she settled into a Cole Valley apartment, just a few blocks away from the shared, sprawling apartment in the heart of Haight- Ashbury, where, nearly two decades prior, she’d written parts of The Childlike Life of the Black Tarantula, her self- published serial novel.

During the five years she spent in Cole Valley, Acker toured constantly. Inherited money and writing income earned in the UK during the 1980s enabled her to purchase apartments in desirable areas. But despite her international acclaim, she had no regular income or health insurance. Throughout these years she was consistently seeking the kind of tenured MFA program job held by many of her former students. Since none of these programs chose to employ her as anything more than a visiting lecturer, she depended on touring for income and to help extend and maintain the niche fan-base from Europe, the United States, and Australia that was essential to the sale of her books. (As she’d confide to Wark: “[T]his is the first time in some years that I’m not running five jobs at once, touring and writing a novel and journalism/theory writing and teaching and what other projects like the Mekons’ record, and I come up for air and who am I… lonely and scared.”)

In 1995, when she met Wark, Acker was still reluctantly living in San Francisco, a city she tried to mythologize as a frontier/queer/outsider-activist town, but which she was attempting to leave. While she had many friends, loyal students, and a comfortable life in San Francisco, it was still a provincial city where most middle-aged writers and artists were ensconced in domestic couples. She’d escaped New York’s intense competition, but nothing in San Francisco offered new information.

As her writing career existed outside the realm of respectable “high-lit” fiction, she cast herself as an outsider icon. Her Australian tour appearances were billed as “Kathy Acker: US Superstar, Punk Feminist Writer,” an increasingly awkward niche to inhabit by the mid-1990s. Since the publication of her 1988 novel, Empire of the Senseless, she’d been trying to shift away from her bratty and raucous punk-era persona toward something more mythological, classically modernist, stately. Before leaving for Australia, she’d turned in the manuscript forPussy, King of the Pirates, a fragmented, rhapsodic account of the adventures of a brigantine gang of queer pirate girls written in Homeric style. As the title and description might suggest, the book served only to reify her long-standing persona.