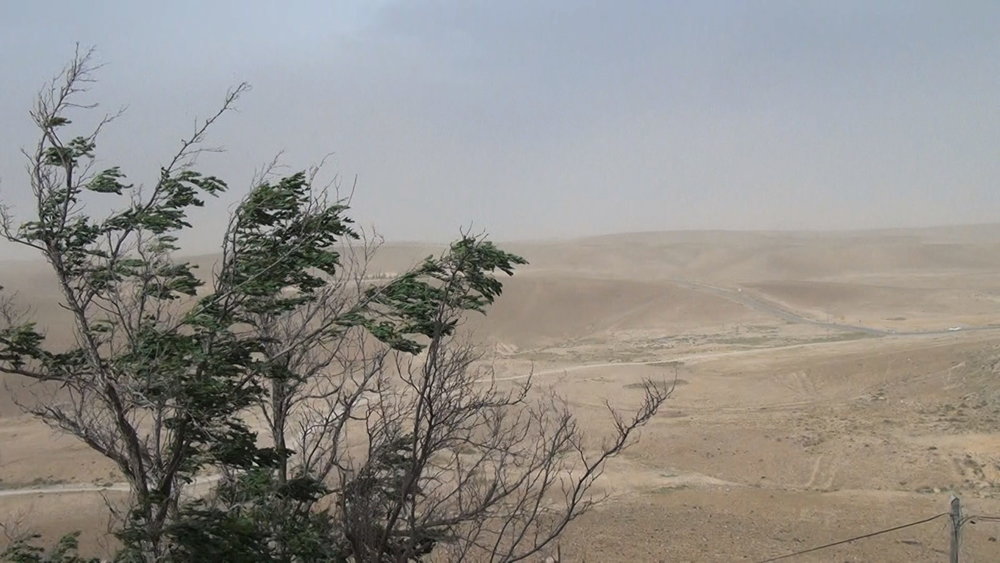 I’m watching a daughter film herself and her mother as they disintegrate side by side. The film is a series of small accumulations, low-level devastations, but I feel untouched until there’s a long shot of some desolate beige land (I’m not sure if it’s Israel or Nebraska). I discover, unexpectedly, that my face is wet. I think this is what Rachel Moran means when she writes I have often wondered what a normal mother/daughter bond is, but because circumstances have placed me so removed from that concept, I do not wonder with any overt sense of sadness; just simple curiosity, tinged with an abstract sort of regret.

With the sound way up on the handheld camera the wind fills the theater. The mother tells the daughter how beautiful her smile is. The daughter says something like, “I’m in a good mood. It’s a rare state, let’s enjoy it.” Both women laugh.

The mother tells the child how proud she was of her in her school days; the daughter responds with her own pride—how her mother, picking her up from school, was the most beautiful woman in the world. In the mother’s eyes the camera with the daughter’s face behind it is slightly visible, as is the mother’s own first experience of being seen and mirrored by her child, as she has done for her for so many years. It’s that moment I’m the most jealous of, the mother seeing herself being seen. Shortly after the film was completed, the mother died and the daughter took her own life shortly after.

The title of the film, No Home Movie, reflects both the gift and the loss. A home contained in a body; the knowledge that body will expire and the home with it. But it had been there, precarious and strained—but there. Gone once the body of Akerman’s mother left the earth: the wind howls through the flaxen or sandy hills.

And then there is the evidence the coroner gathered to identify my mother’s body: the gold in her teeth, my father’s visual confirmation of photographs of her shoes and wedding ring. There is not enough left of the body—the desert is wild and barren—to see her any other way.

I go high up the coast of California to write. From the window of the little house I’m in, there’s a blank meadow bordered by trees over which the coastal fog approaches, descending into the valley, creeping closer.

The fog makes me feel like a character in Long Day’s Journey Into Night. I see my mother and I willfully shrouded in fog, circling each other as if readying to do battle. Our eyes, wary, we tread lightly, gazes locked. Edmund says the fog was where I wanted to be. His mother also builds a blank wall of fog in which she hides and loses herself. Edmund says how, like here, the fog and the sea blend and become one. In walking in the fog you could be walking at the bottom of the ocean, already drowned. Nothing more than a ghost within a ghost. Under certain circumstances, is a baby in its mother a ghost within a ghost? We haunt each other’s margins.

Fog seems like a substance well-qualified to represent trauma: it creeps over the trees into the meadow, obscuring everything and making it unclear, freezing it in time. I even imagine, when the internet goes out, that the fog is shorting out the connection and making it fail, just as my interior “fog” clouds my brain.

The mother’s hands are broken down by arthritis and she says the pain is so bad only a special medicine can fix it. Her sons don’t understand; they see a whore when they see a woman shooting up and their mother was to be a nun, chaste, her hair flowing down her back underneath her covered head, a habit she could drop and become human if she were willing.

I’m always afraid the special medicines I have to take for my pain will get the best of me and engulf me again in a fog I’ll never see my way out of. Where is the line between learning to live with pain and simply being able to function, to get out of bed, to work, to stay conscious while driving, to pay the rent, to say I am an actionable person.

Our faulty fog-shrouded bodies bring up the question of work, which composed all of my mother’s waking life and for a long time mine, before I broke. Everyone seems to be theorizing how the sick or disabled body serves as an obstacle to the machinery of work, but what of how the machinery of work destroys the body? In Capital Marx testifies to the ravaging of young children’s by machines, and if I think of how work and pain made my mother a machine who never did manage to become my mother I start wondering about these theories of resistant ill bodies. If I think of how the machine of her body ravaged my own.

“You don’t have to do much to be transgressive, and that’s a problem.”