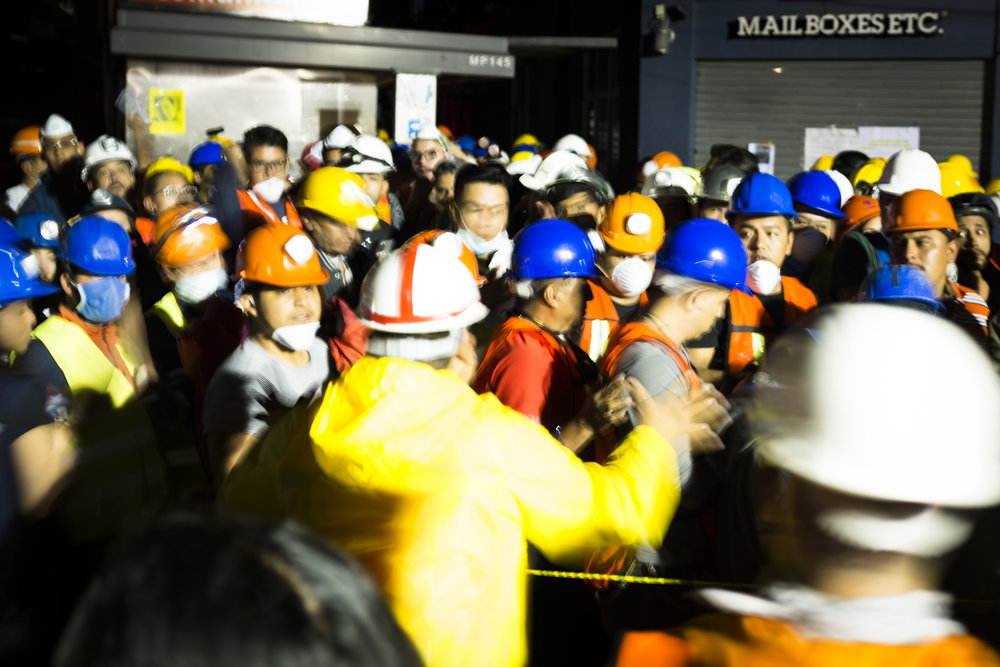 I moved to Mexico City four years after the 1985 earthquake had devastated the city. Condesa, the neighborhood in which I would live for the next 28 years, had been one of the hardest hit. When I arrived the area was still semi-abandoned, under-populated, and with cheap rents and few commercial establishments. Over the last ten years or so, however, Condesa ceased being a mixed, residential neighborhood and had been transformed into a commercial strip with hundreds of trendy and globalized cafes, restaurants, and bars.

I came back to Mexico City this September, as a tourist, to visit my sons who still live in Condesa. I rented a room in a neighborhood a couple of blocks from Reforma, the city’s newest financial hub, in the shadow of four of the tallest skyscrapers in Latin America all built in the last year or so, a sign of how fast the city was changing.

Earthquakes were few and far between during the decades I lived in Mexico City, never causing more than a ripple in the daily life of the city, but two major quakes hit the month I was visiting. The first one struck at night and it was the most intense I had ever felt, lasting over a minute, blowing out electrical transformers on the streets around me, plunging the city into darkness, and making the street beneath my feet rock and roll. A bit over one week later, on the very day of the 32nd anniversary of Mexico City’s largest and most devastating earthquake, an even bigger and much more aggressive shockwave shook the city.

Over the centuries, earthquakes did their part to trim the population, though not nearly so much as other natural disasters, such as volcanic eruptions, famine, drought and plagues, and today earthquakes play a minuscule role in the city’s mortality rate. The city itself is most responsible for the deaths of its inhabitants, by means of the contamination of the air, water, alcohol and food, and these ways to die far overshadow any natural causes, including disasters.

These days, however, there is nothing natural about the deaths caused by disasters such as earthquakes in Mexico City. The media and official news sources cited scientific explanations for the amount of damage caused by this latest earthquake: a huge chunk of the Cocos tectonic plate fell into magma; the epicenter was close to the city; the shockwaves traveled many times faster than those of the ’85 earthquake; the speed of the waves particularly affected large apartment buildings; the areas hit hardest were located above an ancient lake that amplified the shockwaves. All well and good, but the fact that many buildings resisted while others right next to them crumbled, points to only one source, corruption.

Live long enough in a city, and you will eventually see the buildings and cultural venues you love the most disappear and be replaced by crude, commercial, globalized replicas. In Mexico City, the corruption of the local government is to blame for rampant spread of gentrification and globalization within Condesa. Corruption in Mexico City is visible in the pollution that floats above the city and it’s visible in the tainted water that comes out of the faucet. It’s visible in the endless liquor licenses emitted by the local government and the unchecked real estate expansion. In the Condesa, the weekend night traffic that collapses the streets and leads to unabated honking, the dozens and dozens of ugly mafia-run bars with loud music that spill out onto the streets, the every-taller buildings and the general deterioration of the quality of life in the neighborhood are all visible signs of corruption.

After this latest earthquake, each empty space where an apartment building, factory or school collapsed is a visible sign of corruption. The Delegación Cuauhtémoc, the local governmental entity that rules over Condesa, tops the list in terms of number of buildings fallen or severely damaged in this latest earthquake. Of all the buildings that were critically damaged, one in five were built in the last couple of decades. The buildings that fell fell not because the quake was so powerful but because they weren’t built to legal standards. Cheaper materials were used, extra floors were added, the reinforcement of structures after damages sustained in the ’85 weren’t made properly, while at the same time building codes were ignored, inspections were overlooked and licenses that shouldn’t have been issued were given out.

Unfortunately, with so much money at play, government corruption will shape the future development of the neighborhood even more than it contributed to its destruction. Corruption will have its say in which buildings damaged in the earthquake will be slated for demolition and which will not, what will be constructed on the sites, how high the constructions will be built, and what demographics they will serve.

Over the space of 15 years, I watched as dozens and dozens of old, mostly Art Deco buildings were bulldozed and then replaced with concrete and glass condominiums, bringing the Condesa into the luxury real estate market. In just a few days this past week, I watched how dozens of buildings in the neighborhood toppled and were then bulldozed. This latest earthquake might slow down development and lower real estate value in the short term, but capitalism is impatient and reconstruction is a very lucrative enterprise. Just as an explosion is the same chemical process as rust, only sped up, so too disaster is just urban development in fast motion.

During all those years I sat at my desk in my apartment in the Condesa, clenching my teeth from the grating noise of the construction sites all around my apartment, and all those nights I lay in bed unable to sleep due to the noise coming from the bars nearby, I prayed for a disaster to come and wash the tourists and yuppies off the streets, to come and tear down the ugly condominiums rising up all around me.

And then it happened.

For a few days after the earthquake, I got to see the Condesa return to a version of what it had been like when I first arrived. Dark, empty, deserted, no swarms of tourists looking for iced cappuccinos, no party people drinking in bars open until 4 in the morning blaring electronic or ranchero music, no swarm of SUVs choking up the streets.

Just hours after the earthquake hit, people from the neighborhood and from all over the city were there to help, tugging away at the cement blocks and cables, creating their own supply and disposal lines. Those helping out were mostly, though not exclusively, from the working class, a class that had been driven out of the neighborhood in the past decades, and they were mostly young people, mostly Mexicans but also internationals, helping other people without any monetary incentive. The relief effort changed the demographics of the neighborhood instantly and replaced it as merely a commercial destination.

Seeing the Condesa full of people out on the streets, people who were not jogging, walking their designer dogs, or eating brunch and drinking cocktails, was a shock. Having come to hate the neighborhood for becoming an alcoholic theme park, an extension of globalized gringolandia, condominium construction central, I was impressed at the radical difference an earthquake makes in the kind of people who are to be seen on the street.

That first day, the Condesa seemed like it had been transported back in time, before the North American Free Trade Agreement had flooded it with foreign food and alcohol, before hordes of young gringo tourists looking for cheap thrills overwhelmed the neighborhood, before ‘loft’-style condominiums had given it a extreme makeover, before crass consumers became the new normal.

Within three days after the earthquake, the local government, backed by the army, descended upon the neighborhood, brought in giant machines to clean up the mess as quickly as possible, and restored so-called order on the streets. People still helped clear the wreckage and search for survivors after that, they still set up centers for food and water to be sent out to towns that were hit hard outside of the city, they still organized through social media to provide assistance and needed goods throughout the city, but their work was increasingly sidelined by professionals, hemmed in by the army and police, and dictated from above. The relief work people did the days after the quake can itself be seen as a visible sign of the corruption of the government, unable or unwilling to provide such services.

In a month or two, business as usual will return to the neighborhood, and in a year or two the local economy will soar even higher due to the effects of the reconstruction project. The Condesa will then be even more global, represent an even greater luxury market, and serve as an even greater theme park for happy consumers.

The real disasters that affect cities today are not those caused by nature, but by greed and corruption. Like the shockwaves that pass over the city’s dried-out ancient lake, the corruption within the Mexico City government amplifies the damage of an earthquake, and the aftershocks within the neighborhood and throughout the city will be visible for many years to come.