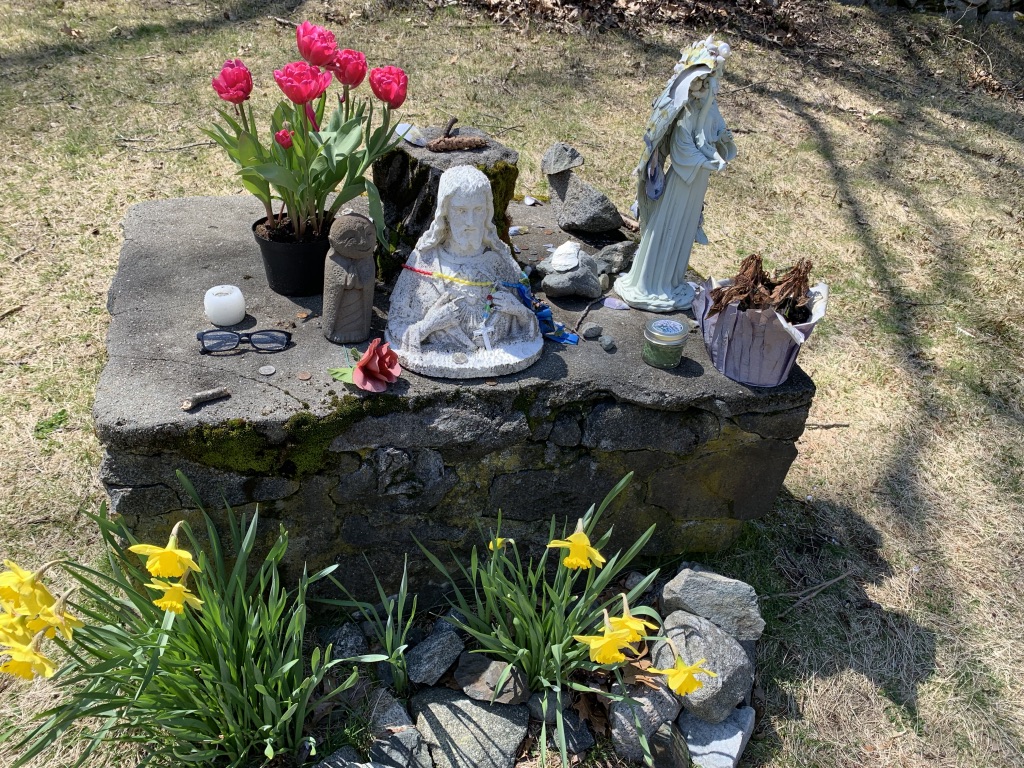 This column is a part of On Foot, a weekly series of short dispatches we’ll be running throughout the pandemic. We’ve asked writers to chronicle their experiences of walking through their neighborhoods, hoping that it captures something about how this moment has impacted people’s perceptions of the environment, their communities, and their own bodies in space. We hope it encourages readers to consider the same.

I’ve spent the past few weeks circling the development where my mother lives, where I grew up. It used to be a golf course, and before that, a farm. Most of the people who live here are older, retired. The houses are a muted array of cold New England hues—grays, blues, and browns. Everything from the size of the roof shingles to the paint on the door frames is strictly regulated by the neighborhood association. There never were many kids around.

When the shutdowns were announced, in mid-March, I drove up here, to Boston, to make sure my mother was taking things seriously, to prevent her from casually dropping by the store. Since then, we’ve managed to rig together something of a routine, punctuating the hours spent in front of our screens with long walks around the neighborhood. Sometimes, in bad weather, we just loop around the pond. Usually there are a couple of neighbors doing the same thing. Their mouths are covered in masks. They wave or nod at us as they cross to the other side of the street.

On better days, we head toward the acres of protected land around the development, which are a godsend, and a marker of our incredible privilege. Since I moved away for college, the regional parks service has cleaned them up a bit, put up signs and markers. My mother leads the way down a dirt path, a trail surrounded by barren forest. Through the trees, I can see the windows of a new luxury apartment complex, which was built, she tells me, from the facade of what used to be the Metropolitan State Hospital. The units come with small windows spaced at regular, clinical intervals. The renovation failed to strip them of the look of sick wards.

I had heard rumors about the abandoned hospital decades ago, from the only boy my age who lived nearby. He called it an insane asylum, and he invited me to walk through the woods to see it with him. I declined, terrified of the hospital, and the boy. Then I forgot about them both. Now, my mother tours me around the remains of the old hospital as if it were a staple of my childhood. She can’t believe I’ve never been here before.

She usually turns around at about the one-mile mark, once she reaches a large, sloping clearing. Lines of small concrete blocks stick out from the hill. Some are slightly askew, others barely peek out from the soil. They have the faintest markings on them: the ones on the far side of the hill are marked C 23, 24, 25, 156, and on the near side, P 1, P 2, P 64, P 65.

A sign explains that until 1979, this was the burial ground for the hospital and the adjacent state school for people with disabilities. Over 360 people were buried here over the course of thirty years, all but four of them anonymously. “C” is for Catholic, “P” for Protestant. Dry, depressed patches of grass mark the outlines of their graves. To be sent away to these institutions was a kind of social death, so no one cared when the patients actually died, or how they went. The idiom “six feet under,” seems newly cruel and twisted, I think, now that we all must stand six feet apart.

On the internet, I learn that a local historian is trying to identify the graves. “We have an unmarked cemetery in our own town and that indignity has got to be rectified,” he tells the local paper. He’s working with city councilors to erect a memorial with the names of the dead. For now, though, there is just a makeshift altar set atop what looks like it used to be a flagpole. A bust of Jesus, a buddha, and a broken lady Madonna, covered in seashells. Recently, someone added a pot of pink tulips, now in full bloom. There’s also a pair of candles (one real, one fake), and a pair of sunglasses, probably lost. It’s a community offering to the unnamed dead, a plea for forgiveness, and for mercy.