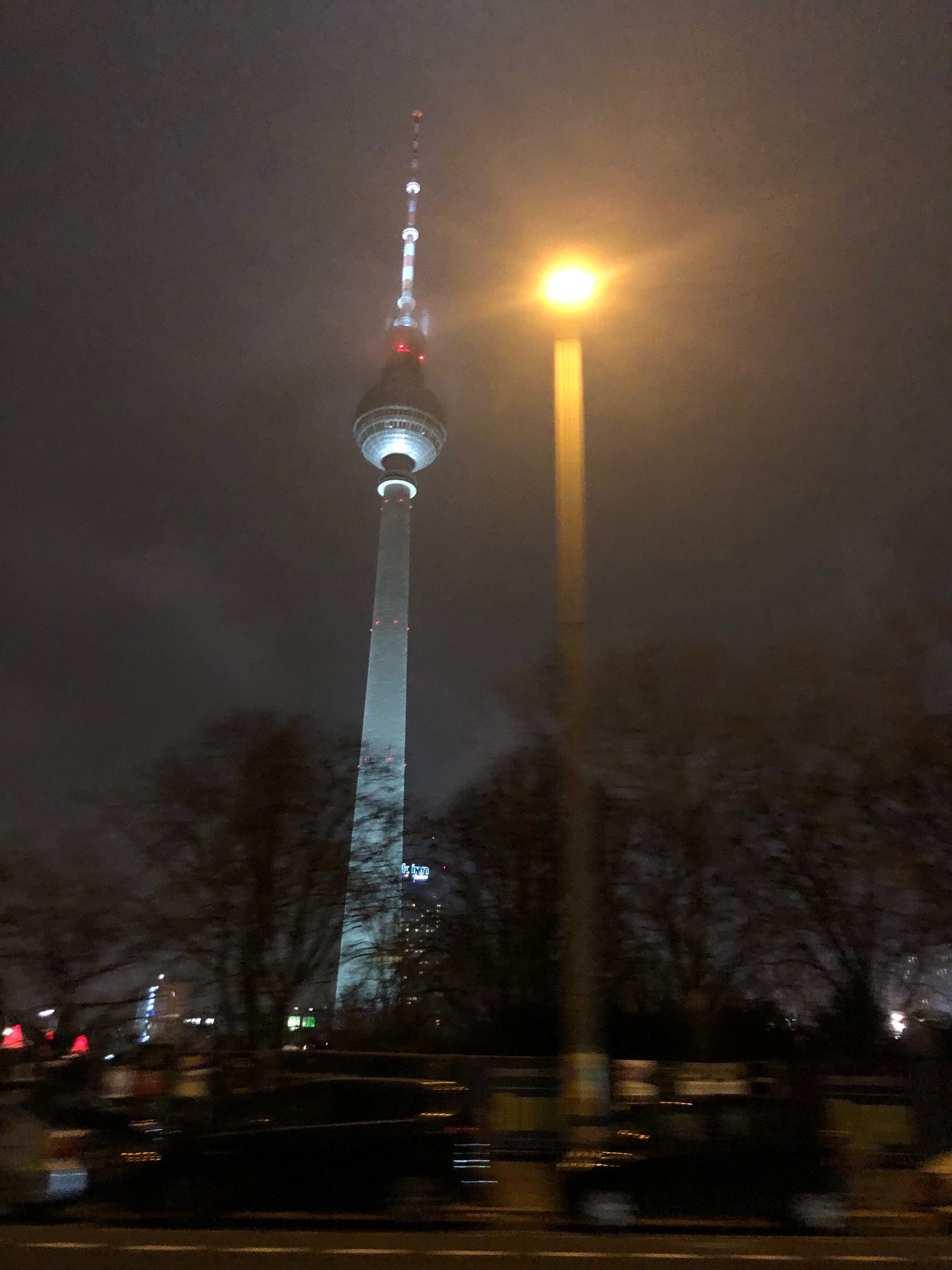 This is the fourth entry in a series in which writers give a report on the weather. Any meteorological statements made may range from the personal to the scientific, from observable weather to the felt. Read the first entry, by Andrew Durbin; the second entry, by Amina Cain; the third entry, by Madeleine Watts.

Evening in Berlin arrives by noon. For the five weeks in November and December that I lived there on an apartment swap, I found myself surrounded by sopping dark—a dark that clung to the mishmash of buildings, parks, snaking canals, bars, apartments, galleries, and Stolpersteine. Kafka wrote in his diaries: “All things possible do happen, only what happens is possible.” That’s weather, and it’s the weather in Berlin, where evening always ticks with promise. More beer, more dancing, more of everything. On brighter days, clouds were flecked with pink and orange light at their downy trim, the stuff of Renaissance backgrounds in scenes from the Crucifixion, but mostly morning and afternoon alternated between the humdrum colors of winter: pigeon’s feather—white spruced with mute blue—and wet cement. Night was starless: a Sachertorte of sky.

I drifted about town for the first few weeks, wrote to friends, read, ate in a cafeteria housed in a grocery chain at the end of my block where, once, I ran into Heji, a friend from New York, who seemed surprised to hear me say I enjoyed the boiled meats. Days often thinned to rain, and a faint mist hung across the whole of the central European plain for most of autumn, or at least the part occupied by Berlin, a city both schismatic and ever new. It huddles in the crater of its past, but signs of the post-war split between Marshall Plan capitalism and Soviet socialism are fewer and fewer; the 29th anniversary of the wall’s fall occurred during my stay without much fanfare—and so, the last century continues to fade to black.

In my first days, I thought I might have made a mistake in committing to the swap for so long. I worried my writing days (I had come to work on a book) might be derailed by booze and boredom, nights at Würgeengel (that’s Exterminating Angel, pace Buñuel), Möbel Olfe, Bar Lugosi, Victoria Bar, and Café Einstein. I also spent too many hours thinking up ways to waste my day, whether by shopping or walking the parks, only to end up nowhere, or in the dark. I read diaries and novels and wrote in my notebook. I drafted emails to friends back home—some were sent, others not.

I wrote to Masha often from a gay bar on Mehringdamm. It was dank and smoky, without much light except for battery-powered candles with plastic flames, the sort usually found on the tops of wedding tables. She and I had both become fixated on Orson Welles again, ahead of the release of his long-unfinished film, The Other Side of the Wind. “I hate every kind of goodbye,” he once said to an interviewer, which she quoted in an email when I told her about Kristian, who had said just that to me one Sunday night at Kottbusser Tor after a five-day affair. (He had to go to Sweden for a few days, and my return to New York was eminent.) Splitting up is always so rich in vexed feeling, but this time I unambiguously hated the thought of going home alone, however invigorating his departing kiss. Welles in Henry Jaglom’s Someone to Love (1987), his last appearance on film says to his director: “We come into the world alone, we die alone, we live alone. Love and friendship are the nearest thing that we can find to create the illusion that we are not totally alone.” His face is worn, dimpled with age marks, and his voice cracks as he speaks. “As far as this movie is concerned, you’ve got your ending.”

“Because we have come to the end.”

“So am I.” Welles then complains that the scene has become “too sweet.” He’s right. They should have cut sooner.

Welles loathed endings. His hatred of finality might explain, besides perennial lack of funds, his many unfinished films. Some are shown in fragmentary form in a new documentary about the filmmaker, They’ll Love Me When I’m Dead. I like best The Dreamers, his 1980-82 adaptation of a short story by Karen Blixen, which he co-conceived with his partner and collaborator Oja Kodar. Two fragments remain, both are ten minutes; the first is black-and-white, the second color. They’ll Love Me includes only a few seconds of the film. A man stands in a lush garden, his face pressed to the metal slats of a high fence. His expression is calm, unworried in the way certain people are before they go out of their minds. A woman, played by Kodar, stands behind him. It’s a sunny day, the setting Welles’s backyard.

I sent the clip from Someone to Love to Masha in an email complaining of the sudden ending of my brief romance and she wrote: “I remember being struck by that. Though I have never believed that we come into this world alone or die alone. I feel like that’s a self-alienating and perpetuating cliché that is taken as truth, when it’s not. With his constant emphasis on love and friendship, Welles refutes his own claim. In Blue, Derek Jarman said: ‘Love is life that lasts forever.’ And in [Michael] Mann’s Manhunter, Will’s wife tells him: ‘Time is love.’” You know that kind of time—it’s like no other. Disintegrative, continuously coming undone. The world becomes as if it were a William Basinski record, looping until oblivion. I’m glad you came today.

Things best remain undone. The weather was unchanging. Everyone had warned me of the city’s bleakness in autumn and winter, how dark the days and nights are, how cold, how miserably wet. I never minded. The city is not like most others, or at least not like New York, my home. New York is vertical, an ever-going-up. Berlin lies horizontal, somehow infinite, with only more doors to open—it is a soft, encompassing dark. There was no day, or day was only ever a sort of inhibition. Night was always elsewhere. After we said goodbye for the first time, Kristian wrote to me the next day: “Denis Riley”—the British poet—“wrote that sorrow is time without its flow. But our five days were ‘all flow.’” I swooned. We saw each other the following night, after all; I cancelled my flight to stay on longer. Saying goodbye is one way of coming alive again.