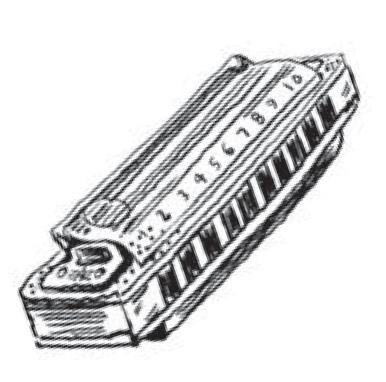 Yesterday I threw away my old harmonica. I guess it wasn’t much to look at (or listen to, some claimed!), but that rusty, broken-down “mouth harp” and I had been through a lot together. As I bade my simple good-bye, part of me was sorrowful in a way that words could never tell. Sure, it smelled awful, and when I looked closely I could see all kinds of weird stuff growing inside. Used to be a little grit and grime was considered a natural part of life. Our forefathers’ doctors never made them give up the harmonica! And then they all died of the painful, harmonica-related illnesses that ravaged the nineteenth-century countryside, and so did their doctors.

Yet as melancholy as I was about giving up my instrument, a spark in my brain told me that this could be a real Verlyn Klinkenborg moment, filled with the ember-hued, autumnal pageantry of time’s sweet decay, just the way I like it.

If I ever have a little girl, I’m going to name her Verlyn Klinkenborg. Don’t tell me you don’t know who Verlyn Klinkenborg is. Would it kill you to get up off your behind and consult Wikipedia? That’s another good name for a girl, Wikipedia is.

Or Harmonica! But that might sting too much. Probably the best thing for me is just never to have a child. I imagine that every time I called her name, I would think of my old metallic friend—don’t be scared! I am talking about my harmonica, not a robot—playing a lonesome lament at a campsite near a sparkling creek.

I’ve never been to a campsite, but I hear nice things. Here’s how I picture it: I come up with a tune so pretty that the curious little fish poke their heads up out of the gentle, murmuring waters. Then I take a stick and jab them in the mouth and haul them up on land, where they make a delicious treat. I’m also wearing a rugged cowboy hat. And I’ve lost some weight and look fantastic, with a five o’clock shadow that I really manage to pull off. And it’s all thanks to my harmonica!

I wish I had learned to play it at some point. But I guess we’re all too busy for our harmonicas these days. And then we have these Ivy League professors going around telling us how these harmonicas of ours are nothing but psychological surrogates on account of how sad we feel about our manhood. Boy, I’d like to give those brainiacs a piece of my mind. Like, if my harmonica supposedly meant something embarrassing, how come I was always brandishing it about in public and wearing it in a special pouch I made for the front of my pants?

I’ll have you know I was mighty proud of that harmonica. You can ask my mother.

Seems to me some of these lab-coat jockeys with their high-and-mighty opinions would be a lot better off if they put down their pill dispensers and picked up a couple of harmonicas of their own. I’ve never been happier than the day I received mine from the deathbed of somebody else’s grandfather. That old fellow just didn’t want to let go of it, and I finally understand why. Now, don’t get me wrong. I don’t claim to be some smart big shot wearing a set of headphones at the U.N., but I like to think I know a thing or two about people. And, well, sir, I don’t reckon there’s a problem on this Earth that couldn’t be made just a little bit easier by pulling out a harmonica. Mudslides, sure, you got me there. But that’s the only one.

I’ll tell you one thing: there’d be a mite fewer wars if everybody had a harmonica instead of a gun.

Can you imagine shooting somebody with a harmonica? Now that you mention it, I guess there could be a way to make tiny bullets come out of the holes. The bad guys would never see that coming. And maybe you could rig it so that when somebody tried to play your harmonica, it would shoot that person in the mouth instead. Sweet!

Build Me an LA Woman