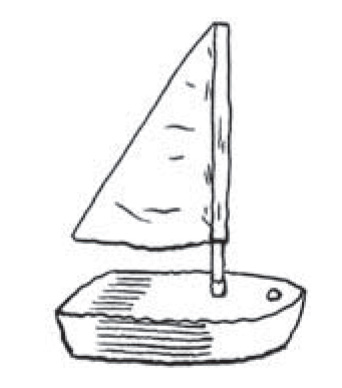 I don’t want to be that guy’s wife, Debra. When the guy comes home Debra asks him what he did that day and he says he left work early and thought about buying a chisel but then he didn’t.

Debra goes, “Oh, brother, that’s you in a nutshell! You’re going to get fired if you keep this up. Plus, you can never make up your mind about what you want to do. I want a divorce!” They’re doing dishes together and the guy, Pete, throws the sponge into the soapy water.

I also don’t want to be their kid sitting in the other room, holding a toy sailboat in his hands and crying. Later the kid grows up and somebody sends him  a postcard from Mt. Rushmore; it’s his girlfriend, and she’s breaking up with him. On a postcard. She says she met someone. At Mt. Rushmore.

Don’t get me wrong: I have nothing against the celebrities immortalized on Mt. Rushmore. All of them were folksy in their own ways, and folksy is a quality I really cotton to.

Teddy liked to wrestle. Abe was famous for his wisecracks, and he also liked to wrestle. I’m not talking about sophisticated big-city wrestling. I mean county fair wrestling, bare-chested and in overalls, often with a pig involved.

I’ll admit that George Washington seems like a big stiff, riding around in boats just to show off his expensive wigs and hats, but his teeth were made of wood, the folksiest material for any body part. He also had two wooden legs and two wooden eyes. There was practically nothing you could tap on George Washington that wouldn’t make you say, “Hey, that’s made of wood.” I’m sure he got sick of people walking up and just tapping and rapping on him like it was some kind of fun game while he was trying to take care of some paperwork. So anyway, we’ll give him a pass on the folksiness thing.

I know there’s a fourth person on Mt. Rushmore, but who is it? I want to say it’s Grandpa Jones from the TV show Hee Haw. Not sure.

I’m not really talking about Mt. Rushmore here. I’m talking about what’s important in life. It’s not fame and glory and power and monuments and respect and honor and titles and money and achievement and renown and riches and accomplishment and wealth and fame and glory. Well, some of those things are important. Looking back at my list, in fact, all of these items are very, very, important. I’ll just die if I don’t get my hands on at least four of them.

But did you ever stop to think about what’s not on the list? Take “focus,” for example. The word “focus” has become a modern-day mantra for the on-the-go business traveler and savvy homemaker alike, but isn’t it possible to be too focused? Gazing up at the mighty figures on Mt. Rushmore, mightn’t we forget to look inside ourselves, at the infinite possibilities nestled therein? Because I’ll tell you what’s not on that list: every other word in the dictionary.

And in case that didn’t blow your mind enough, I’m going to open the dictionary at random, to prove my point.

Circumscissile – in botany, opening or splitting by a transverse fissure around the circumference, leaving an upper and lower half: said of certain seed pods or capsules.

An Interview with Stephen O Malley