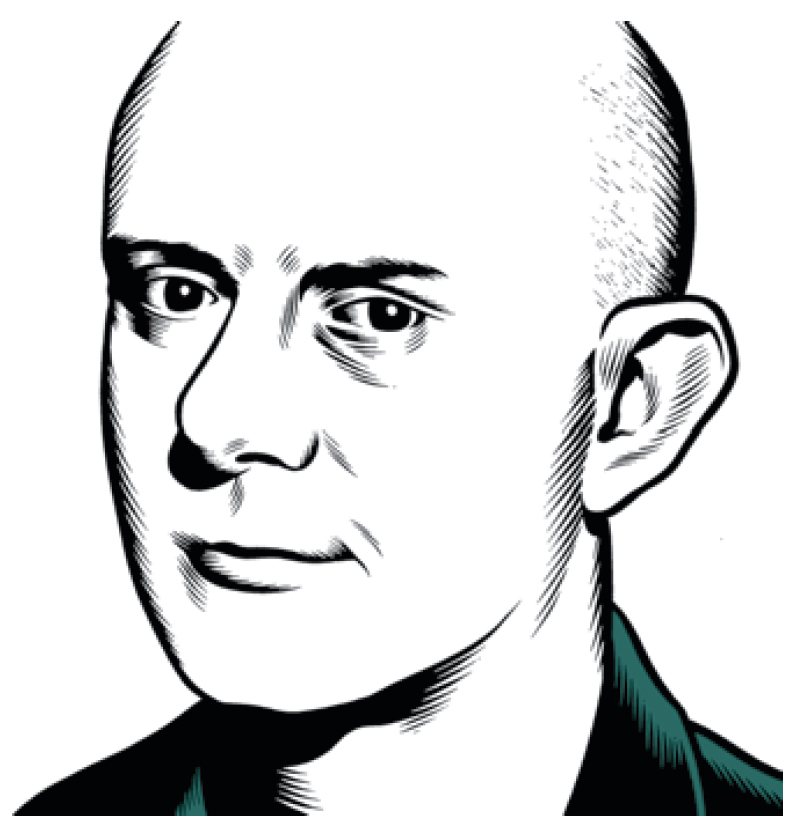 You have probably noticed that we don’t think much of scientists, here at Believer Towers. The Polysyllabic Spree, the eighty-seven white-robed and intimidatingly effete young men and women who edit this magazine, are convinced that the real work in our society is done by poets, novelists, animators, experimental filmmakers, drone-metal engineers, and the rest of the riff-raff who typically populate the pages of this magazine. I, however, am not so sure, which is why, after a great deal of agonized internal debate, I have decided to introduce a Scientist of the Month Award. As will become clear, this month’s winner, Matthias Wittlinger of the University of Ulm, in Germany, is a worthy one, but I am very worried about several, if not all, of the months to come. I don’t really know much about science, and my fear is that we’ll end up giving the prize to the same old faces, month after month after month. A word in Marie Curie’s ear: I hope you have plenty of room on your mantelpiece. Without giving anything away, you’re going to need it.

According to the July 1 edition of the Economist, Matthias Wittlinger decided to investigate a long-held but never proven suspicion that what enables an ant to find his (or her) way home to the nest is an inbuilt pedometer—in other words, they count their steps. He tested this hypothesis in an ingenious way. First, he made the ants walk through a ten-meter tunnel to get food; he then made them walk back to their nests through a different ten-meter tunnel. But the fun really started once they’d got the hang of this. Wittlinger trimmed the legs of one group of ants, in order to shorten the stride pattern; another group was put on stilts made out of pig bristle, so that their steps became much bigger. The results were satisfying. The ants with little legs stopped about four meters short of the nest; the ants on stilts, meanwhile, overshot by fifteen feet. Anyone who thinks that someone other than Wittlinger is a more deserving recipient of the inaugural Stuff I’ve Been Reading Scientist of the Month Award is, to put it bluntly, an idiot. Science doesn’t get any better than this.

I’m delighted for Matthias, of course, but I am also feeling a little rueful. For many years now, I’ve been trimming and lengthening ants’ legs, mostly because the concentration and discipline involved has allowed me to forgo all sexual activity. (I have been using pieces of old guitar string for the stilts, and guitar string is funnier than pig bristle, because the ants kind of bounce along.) I wasn’t, however, doing it in a particularly purposeful way—I had no idea that I could have been written about in the Economist, or that I could win prestigious awards. And anyway, I was making an elementary error: I was trimming and lengthening the legs of the same ants—and this, I see now, was completely and utterly pointless: three hours of microsurgery on each ant and they all ended up the same height anyway.

Cynics don’t read the Believer, which is fortunate, because a cynic might say that the introduction of the Scientist of the Month award is a desperate attempt to draw attention away from the stark, sad entry under “Books Read” at the top of this page. And a clever cynic might wonder whether the absence of read books, and therefore the appearance of the award, have anything to do with the arrival of the World Cup, a football [sic] tournament that every four years consumes the inhabitants of every country in the world bar the U.S. The truth is that the World Cup allowed me to introduce the award. I’d been meaning to do it for years, but space had always prevented me from doing so. Now that I have no books to write about, I can fulfill what can be described, without exaggeration, as a lifelong dream.

I wish I had read some books this month, to be honest, and not just because I wouldn’t have to drivel on about nothing for a couple of pages. It’s not that I believe reading is more important than sport, but there have been moments during this last month when I knew, beyond any shadow of a doubt, that I was wasting my time and yet made no effort to turn off the TV and do something more constructive. Watching Ukraine v. Tunisia can in part be explained by my bet on Andrei Shevchenko to score during the game. (He did, after taking a dive to win a penalty that he himself took.) But I have no way of rationalizing my willingness to stick with Ukraine v. Switzerland, even after it was clear that it was going to be perhaps the most pointless and boring ninety minutes in the history, of not only soccer but of all human activity. Couldn’t I have read something at some point during the second half? A couple of Dylan Thomas’s letters, say? They were right there, on the bookshelf behind the sofa.

It wasn’t a very good World Cup. The star players all underperformed; everybody was too scared of losing; there were too few goals, too many red and yellow cards; and there was way too much cheating and diving and shirtpulling. And yet the rhythm of a World Cup day is unimprovable, if you don’t have a proper job. You wake up in the morning, do a little online betting, read the previews of the games in the newspaper, maybe watch the highlights program you recorded the previous night. The first game is at two, so just beforehand you are joined by other friends without proper jobs (some of whom won’t leave until eleven that night); it finishes at four, when you repair to the garden, smoke, drink tea, and kick a ball about with any of your children who happen to be there. The second game finishes at seven, just in time for bed, bath, and story time, and I don’t know about you, but we used the “live pause” feature on our digital system for the eight o’clock game—there was a heat wave in Europe, and my kids took a while to get to sleep. Food was ordered at halftime and delivered during the second half. Has there ever been a better way to live than this? Friends, football, takeaways, no work…One can only presume that if Robert Owen and those guys had waited a couple of hundred years for the invention of the World Cup, takeaway food, digital TV, and work-shy friends, there was no way any utopian experiment could have failed.

For maybe the first time in my life, however, I have begun to sympathize with Americans who find the game baffling and slow. The lack of goals has never bothered any football [sic] fan, but when it becomes clear that a team doesn’t even want to score one, that they’d rather take their chances in a penalty shoot-out, then the lack of action ceases to become a matter of taste and starts to look like a fatal flaw in the tournament. If you’re so scared of losing, don’t enter! Stay home! Let Belgium and Lithuania play instead! Many teams played with one striker, playing all on his own against two or three defenders; England’s striker Wayne Rooney became so frustrated by these odds that he attempted to even them out by stamping on the balls of one of the defenders looking after him.

We can be pretty sure that it hurts, having your testicles stamped on, but I understand that Americans have come to refer contemptuously to the more theatrical World Cup injuries as the “flop and bawl”—the implication being, I think, that these players are feigning their distress. First of all, you must understand that the rest of the world is more susceptible to pain than you. Our smoking, our poor diets, and our heightened sensitivities (to both literature and life) mean that even a slight push in the back can send excruciating agony coursing through our bodies. You, however, because of your all-meat diet and your status as a bullying super-power, feel nothing, either emotionally or physically, at any time. So you can sneer at our floppers and bawlers if you want, but what does that say about you? How can you ever understand a novel, if you don’t under-stand pain?

And secondly, these players are terrible, awful cheats. It wasn’t always like this. But ten or so years ago, those in charge of the game decided, laudably, that they wanted to encourage the more creative players, which meant penalizing the defenders whose job it was to stifle that creativity. Nobody foresaw what would happen as a result: that these creative players would spend more time trying to land their opponents with a yellow or red card than they would trying to score a goal. (A yellow card means that the recipient is frightened of making a tackle for the rest of the game; a red card means he can’t take any further part. Either is useful for the opposing team, which means there’s too much of an incentive to fake an injury at the moment.) In my book Fever Pitch, which was first published in 1992 (and you can take great literature out of the month, but you can’t take it out of the man), I wrote that “for a match to be really, truly memorable… you require as many of the following features as possible,” and the sixth requirement listed was for a member of the opposition to receive a red card. At that time, I’d maybe seen half a dozen sendings-off in my twenty-five-year life as a fan; in the last five years, I’ve probably seen five times that many. It’s no fun anymore, and it kills the game. I withdraw my earlier ruling.

The saddest moment for me in this World Cup was watching Thierry Henry, my role model and hero and the man that both my wife and I wish had fathered our children, clutching his face after receiving a blow on the chest. Et tu, Thierry? Anyway, flopping and bawling now occupies the same position in our sporting culture as steroids do in yours. Crying like a baby is obviously less harmful than performance-enhancing drugs, but a lot more annoying to the spectators.

I have always previously referred in these pages to the mother of my children as my “partner”; you may have noticed that she has now been downgraded to “wife,” due to our marriage, two days before the World Cup final. This too has resulted in less reading than nor-mal, what with all the suit fitting, seating plans, parties, and the actually rather distressing legal requirements for consummation. I have read a little, of course. I abandoned a sweet-natured but hopelessly overhyped novel halfway through, and I’ve nearly finished Imperium, my brother-in-law’s forthcoming novel about Cicero, which I’ll puff next month.

I’ve been buying books, too. At my eldest son’s school fair I bought The Case of Mr. Crump, yet another Penguin classic I’d never heard of, because on the cover it had a blurb from Sigmund Freud. I bought Elizabeth Kolbert’s Field Notes from a Catastrophe, about climate change, after reading the brilliant but terrifying series of articles in the New Yorker that form the basis for the book. I thought I was buying it because I wanted to be reminded that things like the World Cup and weddings don’t really matter. But then I began to remember some of the details of the New Yorker pieces, and I changed my mind: if things are as bad as Kolbert suggests, then weddings and the World Cup are the only things that do matter.