What the Swedes Read: Bjørnstjerne Bjørnson 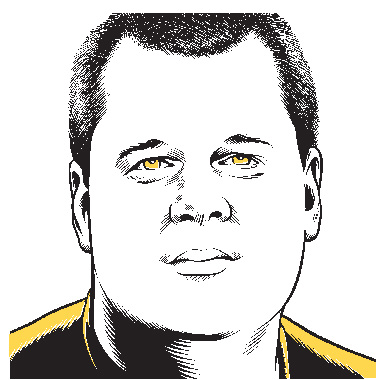 Here is a quick test for you. Read the following passage:

ELIAS: Both of us believe that God is something we have to work out within ourselves. BRATT: Yes.

ELIAS: That He is evident in the eternal order of the universe, and that to man this order means justice—the growth of justice.

BRATT: And of goodness.

ELIAS: But isn’t He evident in war also? Could He stand outside of that? …

BRATT: There are so many kinds of war.

ELIAS: This is the kind I am thinking of: to sacrifice oneself in order to destroy those that will evil.

BRATT: If that kind of war comes within the order that is justice—?

ELIAS: Yes. [A MAN IN BROWN has stolen up close to them without being noticed by either one of them. At this moment he puts his head in between them, with his face close to that of BRATT.]

BRATT: Ugh! What is the use of that sort of thing? Why must he always come like that?

MAN IN BROWN [Crouching on his haunches, with his hands resting on his knees, begins to laugh wildly]: Ha—ha—ha—ha! [He hops around like a bird until, at a sign from ELIAS, he suddenly disappears.]

BRATT: Is it never possible to have a talk with you without that fellow getting in between us?

Now, then, answer honestly: what was the most interesting part, to you? Was it the conversation about God and war and sacrifice? Or was it when a man dressed in brown started hopping around like a bird?

Either way you’ll find more of this sort of thing in Beyond Human Might, one of the many, many works of Bjørnstjerne Bjørnson. His oeuvre includes novels, long poems, plays, and the lyrics to the Norwegian national anthem (“Yes, we love this country / as it rises forth / rugged, weathered, above the sea, / with the thousands of homes…”), earning him not only the Nobel Prize but a place in Norway’s De Fire Store, the Four Greats, in the company of Henrik Ibsen (of course, of course!), Jonas Lie (maybe that sounds a little familiar), and Alexander Kielland (no idea). Bjørnson’s profile, at least in the English-speaking world, is not, shall we say, at its zenith—and sadder still is my old and crumbly edition of his plays, in which quite a few pages were uncut. More than one hundred years ago, Charles Scribner’s Sons published this book by a Nobel Prize winner, and I’m the first guy to read the thing.

I wish I could say this was surprising. While reading Beyond Human Might, I couldn’t imagine such a play being produced nowadays. Bjørnson is working on an epic scale, in story, theme, style, and language. The play is in four acts, and contains murders, acts of terrorism, financial wheelings and dealings, political conflicts, family angst, and substance abuse; the characters discuss—and boy, do they discuss—God, country, morality, loyalty, greed, feminism, capitalism, and an assortment of other Big Ideas. The scope wavers between small, private scenes of individuals and set pieces of a size I can’t imagine taking place onstage. (A funeral procession down a craggy cliff? What was Norway’s theater budget back then?) You don’t see a lot of this nowadays. By and large we have ceded our epics to shallowness, and our serious work tends to be quiet and small.

Nowhere is this more evident than the theater. If you want to see difficult themes onstage, you’re likely going to see a play with maybe four characters in it. If you want something on a larger scale, you’re going to have to sacrifice anything head-scratchy and plunk down money for a showstopper. In this way, Beyond Human Might feels deeply, deeply unfashionable. And in lots of other ways. The speeches are very long. The circumstances are very ridiculous. And the way the panicky melodrama keeps bumping up against the intellectual contemplation—the way a madman might run onstage and interrupt a conversation about God and war— gives the play the feel of an old biblical movie. I can’t claim that nothing happens, because everything is happening. But yet, nothing is happening.

Elias, chewing over morality and shooing away a bird imitator, is more or less the play’s central figure, a man who has watched his small, industrial community—which everyone calls Hell, to give you an idea of the subtlety of Bjørnson’s brushwork—come to wrack and ruin in the wake of a long labor strike. A ghastly tragedy of Medea-like proportions—indeed, a grimy one-shoed man quotes Medea while talking about it—has further roiled Hell, resulting in some speeches I cannot imagine anyone sitting through in a theater. Far above Hell—think about it for a second—the captains of industry hold a meeting to plot their continued resistance to the needs of the common man, and the choice of meeting place, a large, illuminated castle, is for some reason the last straw for Elias, who hatches a scheme shaped like V Is for Vengeance but presented like My Dinner with Andre. Elias’s trajectory is balanced by that of his sister Rachel, who has a cozier relationship with the powers-that-be, the better to finagle money for her greatly needed hospital at the cost of her own happiness as she gives up her educational influence on two children originally meant to be in her care but who, in the wake of the Medea Incident, fall under the conniving shadow of the occasionally flirtatious tycoon whose political and philosophical ambitions fuel a committee into taking actions that only further corner the burgeoning underground movement whose rage drives them to impulsive catastrophic action, which in turn discredits, both philosophically and actually, their impassioned but nonetheless doomed scheme to rescue the town from misery, and maybe you can see why this play is both uneventful and overeventful. There are whole subplots that the play doesn’t seem to have room for—I had trouble keeping four or five characters straight in the opening scene, but luckily for me they don’t turn up again—and yet there seemed time for pages of fiery, abstract debates that culminate in plot points such as the selection of a board of arbitration. Amazingly, in a play in which hundreds of people die in a collapsed building, it’s the long conversations that dominate the action, particularly in the last act, when Rachel—a stand-in for the author, claims the translator—talks and talks of how things could have gone better. And talks. And talks.

Still, I sort of loved it. Reading Beyond Human Might—and just think about that title for a second—resulted in a sort of giddy thoughtfulness in which I could think for a while on what one man actually owes another man on this lonely planet, and then, just when I couldn’t take it for a minute longer, laugh out loud when a servant interrupts to announce that the old mining gallery right beneath the meeting room is loaded with explosives. In the end, the play felt like a shuffling of the hysterical and the methodical, an action movie and a Socratic dialogue both wrestling for my attention, so unlike anything currently on offer that I applauded its crazy breadth, or what the Swedes called his “noble severity… infinitely preferable to the laxness that is all too prevalent in the literature of our day.” Hear, hear! Wait, infinitely preferable? Don’t push your luck.

The Boss Tells Me

An Interview with Matt Bai