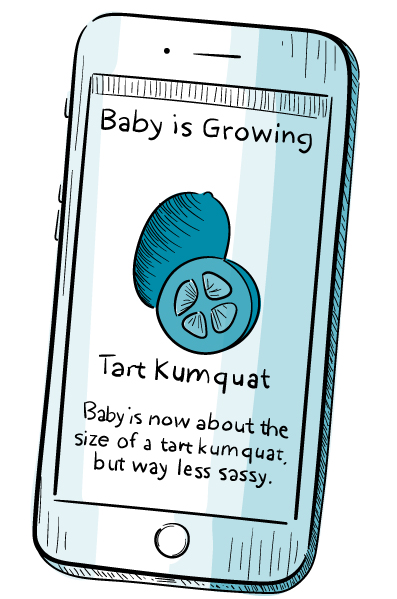 In the beginning, there was a blueberry. The following week, a strawberry. The week after that, a green olive. All round, with soft insides, easily cradled in the palm of your hand as you would a precious stone. The fruits were offered by various pregnancy tracking apps to signify the growing size of my baby. Their innocent and squishy tenderness didn’t sync with reality, though. Adjusting to pregnancy had been an enormous feat in the first place—when you don’t intentionally get pregnant, accepting the imminent changes to your life and body is a challenge, and the twee comparisons between a developing fetus and fruits brought out my inner Daria. Pregnancy was inscrutable, uncomfortable, terrifying, and sometimes terrifyingly boring, and it had eliminated all the chemical crutches I typically used to deal with change and the unknown. Whatever was happening inside my body wasn’t adorable, and it didn’t look like a fuzz-dusted peach (thirteen weeks).

I marveled at the distance we had all come since What to Expect When You’re Expecting, the ubiquitous pregnancy guide first released in 1984 and later, weirdly, adapted into a movie. The book has endured decades of criticism for fearmongering: many readers’ takeaway was that a pregnant woman should cloister herself from the hostile world—and yet it has sold over 42 million print copies and is read by more than 90 percent of pregnant women. I bought myself a copy, mostly to throw it into a pile with other pregnancy books and hate it from afar. What to Expect is an app now, too, and it is flawed like the rest: deploying edible flora to describe the march of the growing fetus.

Some weeks into my pregnancy, a friend recommended the Ovia app, describing it as “less annoying” than the others. Like them, Ovia is a pregnancy tracker, but in addition to fruit analogues, it offers Parisian Bakery, Fun & Games, and Weird-But-Cute Animals. It wasn’t clear at first how this was better—so I was surprised to find it was. Abstracting my pregnancy into baked goods and sea creatures helped me to stop fixating on the uncertainties of impending motherhood. The unseen cargo inside me took shape and became visible not just as easily bruised, vulnerable things but as otherwise fascinating and playful things, some with zippers, some with flippers, some with fuzzy ears. Sunday became my best day: it was the day a new object would represent my baby. My imagination would refresh; my anticipation would become young again.

At twenty-seven weeks, my baby was a sweet potato—and also a croissant, a slingshot, and a sugar glider. At thirty-one weeks, she was a head of romaine lettuce, a croquembouche, a foam finger, and a small-clawed otter. There were inconsistencies. At twenty-four weeks, she was the size of an Atlantic puffin but also a GI Joe, which I’d thought was very small. The bakery item that week was a demi-baguette, which further complicated things, as a baguette is long and skinny, unlike a rotund Arctic bird. Later, I realized I had confused the GI Joe with a toy soldier. (I myself had been a Teenage Mutant Ninja Turtles girl in childhood.) Some weeks I tried to average out the animal, vegetable, toy, and bread and come up with my own Jabberwocky: a puffin with baguette legs and a GI Joe head.

In the meantime, the app sparked a curiosity in me that led me to hunt down factoids: a fennec fox (twenty-seven weeks) is the national animal of Algeria and also the inspiration for the Pokémon called Fennekin; an Ispahan (twenty-one weeks) is a dessert delicacy created by famed pastry chef Pierre Hermé and is meant to resemble its namesake rose; a Philippine tarsier (sixteen weeks) has the largest eye-to-body ratio of any mammal on the planet and looks like a little Yoda who took ecstasy and is clinging to a tree branch until its bad trip subsides. And where do I even begin with the axolotl (twenty weeks), also known as a “walking fish,” with lidless eyes and a crown of mini conifer trees on its flat, friendly head: a little pink frond dragon of my dreams. Admittedly, none of these was very accurate in terms of size and shape. Most faithful, at least in feeling, was the beach ball (forty weeks).

Months after I had my daughter, I was still receiving emails from Ovia. In one of them, the company introduced a new line of week-to-week illustrations—not of toys or animals or edible objects, but of actual fetuses. I scrolled through them. They were complex, sensitive, and resembled vintage medical illustrations, those efforts of doctors and scientists to render the hidden interiors of the body. Though exquisite, the biological accuracy of the fetuses slightly alienated me, the way a reflection in a true mirror does with its grotesque authenticity. Suddenly, the skateboards and slow lorises made sense. Those amusing distractions had helped my mind make the leap from a life of couch wine and Bravolebrities to a life of care and commitment. They made me fall in love with the idea that I was pregnant.

Admittedly, the app hadn’t been useful for much else. It recommended baby names, fetus-friendly foods, and hospital checklists, but it didn’t address any of the real questions I had: How would I give birth and would my baby be healthy and what kind of mother would I be? How would my life go from here? Our imaginations require confidence to fill in the gaps where our knowledge can’t get a foothold.

At forty weeks, my baby became a red panda. She stayed that size, in the app, as the days past my due date ticked by. When I entered the hospital to be induced, I was racked with fear that my baby was now a giant raccoon. I would find out two days later, when my daughter eventually arrived: she was weird, cute, and also human.

Dear Sir: Responses to an Ad Placed by a Nineteenth Century Murderer