How to Make a Bodega Sandwich 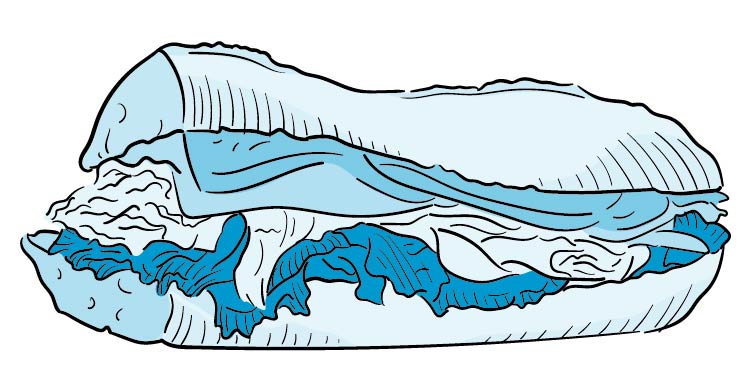 To properly construct a bodega sandwich, sammich, hoagie, or sub, it is helpful to first consider Théodore Géricault’s The Raft of the Medusa. Forget for a second that this painting ushered in the dawn of Romanticism. Instead, study the shipwrecked subjects, the fifteen men with faces longer than hymns who endured their own appetites for thirteen days at sea.

Bodegas often serve those who can’t or won’t eat elsewhere. Bodegas are cheap, accept EBT cards, and employ polyglot cashiers who can translate a purposeful nod into a chopped cheese. Where else to go after a longer-than-expected trip across an ocean? Where else can the impossibly hungry go? Think about all this while selecting a bread. When in doubt, choose the plain hero. It should be between one and three days old.

For the purposes of these instructions, assume that a customer has left the disposition of their lunch entirely in your hands: “Whatever’s good.” This brings us to the dressing. Mayonnaise. Oil and vinegar. Never ketchup. Sometimes mustard. In rare cases, margarine or butter. When deliberating dressing, it matters less what you pick and more that you spread it lightly. Keep in mind eutrophication, or hypertrophication: the oceanological process wherein a body of water becomes so enriched with nutrients that it is depleted of oxygen. Nothing kills a sandwich faster than asphyxiation by way of mayo. Be easy, and keep it breathing.

Now, before laying the groundwork of meat and cheese,[1] understand that your creation may have to stand the test of refrigerated time. At this juncture, I like to visualize Nike Foamposites, sneakers that can endure the rigors of professional basketball and, as anyone who has held a pair can attest, years of nuclear fallout. Your sandwich won’t be braving a full-court press or an ambassadorship in Pripyat, of course, but it does have to maintain its integrity. The trick here is balancing the quality of the sandwich’s life against the rate of its decay. It sounds as if that’s a broader lesson of sorts. It isn’t. Pastrami and mozzarella, when paired, will always transmogrify into mush.

Inextricably and at long last: lettuce and tomato. Bucking modern sensibilities, these two, in the context of a bodega sandwich, are a long way from whole foods. The lettuce is usually shredded, the tomato sliced. Together, they serve an entropic function. In fact, should you open the sandwich five minutes after closing it, you will find the ribbons of green and half-moons of red in entirely differently places from where you set them down. For all we know, it’s the observer effect, and by looking at them you’ve invariably altered their state. Or maybe they’re a reflection, a reminder that you, too, have changed since you last checked. Handle them for long enough and you might learn that lettuce and tomato are separate yet bound together, equal parts ivy and the trellis it moves through. So don’t skimp. And don’t use one without the other.

The best part, the fixins, are strictly a matter of personal preference. Subway, despite its obvious failings, was on to something when it decided to call its employees “artists.” Your job is to channel Dieter Roth. Assemble estranged and disparate bedfellows. Think hypothetically. Banana peppers and mango and pickled lotus root? Yes. Plantain chips and radish and triturated Excedrin? Go with God. There’s no accounting for taste, but there’s no dispensing with it, either.

Finally, wrap the sandwich in wax paper and split it using a serrated knife. A single, brutal cut will do. Return to the Medusa’s raft once more. Only fifteen men were rescued, one hundred and thirty-two were lost. Put the sandwich in a bag with two and only two of the world’s worst napkins. Those men were lost to dehydration and starvation and practiced cannibalism. Slide the bag over the counter and look at your customer, the tired commuter, the truant high school student, the jocular imam, the neighborhood snitch, your spouse or child. Remember: you are nourishing nothing less than their survival.

[1]  In the event that you are responsible for a vegan arrangement, let your customer know that they have confused your bodega for a fancy deli. There’s nothing wrong with a fancy deli, but it is decidedly not a bodega. You can even give them directions to one, if you’re feeling generous.

An Interview with Joan Silber

An Interview with Lydia Davis