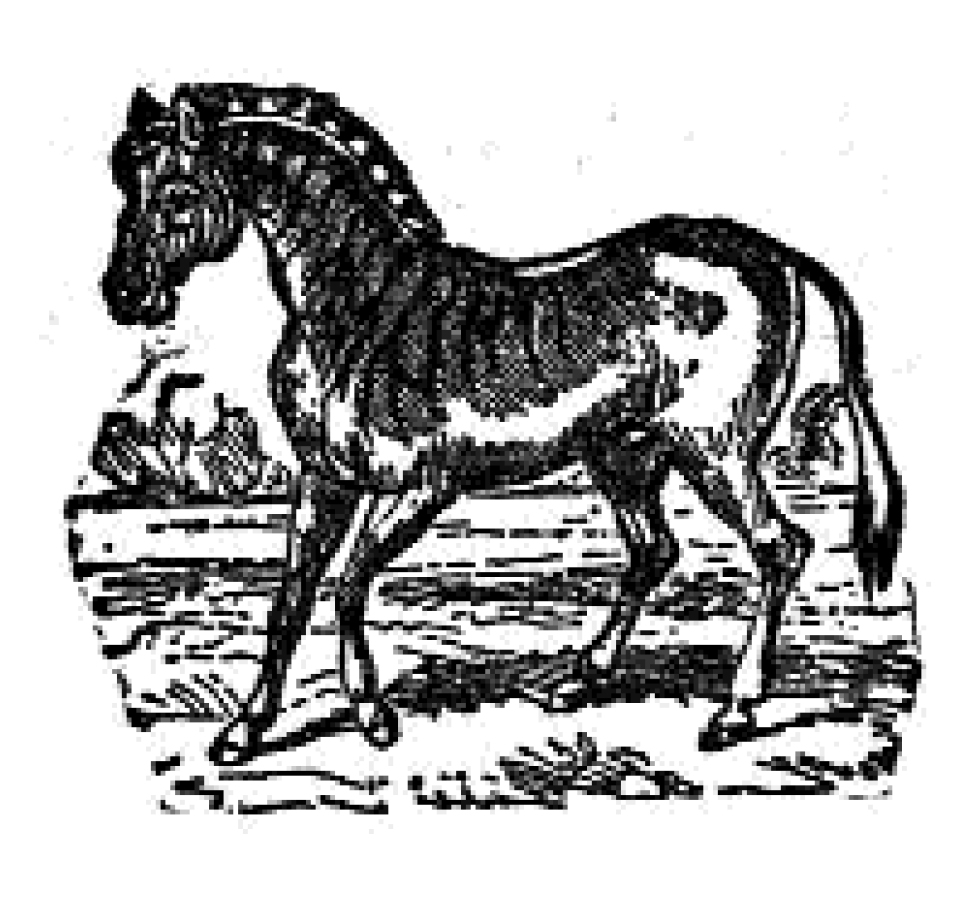 The extinct quagga, named for its distinctive kwa-ha-ha call, was a horse of an entirely different color. Unlike its close relative, the zebra, the quagga’s cinnamon and cream stripes appeared on the front part of its body only. In its midsection, the spaces between the stripes became wider, fading to chestnut brown on its hindquarters and rump. Its tail and legs were bright white.

Thousands of quaggas once roamed the sundrenched plains of South Africa attracting the attention of the Europeans moving into the interior. A British hunter in the 1840s wrote that quaggas at a distance sparkled like mica. Quaggas were subsequently hunted down for their fabulous skins, and their meat was used for feeding the settlers’ servants. Each quagga had its own unique set of stripes, much like human fingerprints, and the skins were prized for their varying colors and patterns.

When a quagga member became separated from the herd, the family stallion would locate the missing animal by using his unique call, which was then echoed by the other quaggas, a loud chorus of kwa-ha-ha sweeping across the open veld, guiding the stray home. Like zebras, quaggas were mostly grass eaters, turning to the more digestible parts of trees and shrubs only when pressed for food. According to T.C.Winkler, who wrote an informative essay about quaggas for the Amsterdam Zoo in 1880, zebras and quaggas, despite their similarities, never mingled. Ostriches, however, were often found strutting in the midst of quagga herds searching through piles of their dung for huge beetles, which they then scooped up and ate.

Because quaggas were capable of defending themselves against most predators (with the exception of lions) Dutch farmers in the Cape of Good Hope often kept them with their cattle to chase away hyenas and other invaders. There seems to be some disagreement about their ability to be tamed, though. Some reports speak of Dutch farmers using quaggas under harness. Other equally credible sources describe quaggas running amok, destroying the carriages they were meant to pull, and chasing away everything in sight.

The last quagga to die in captivity came to the Amsterdam Zoo (Natura Artis Magistra, commonly known as Artis) from the zoo in Antwerp in 1867. A deal was struck between the two zoos, Antwerp offering the quagga, a blue gnu, a Canadian crane, and a pink pelican in exchange for Artis’s young plains zebra and eighty Java sparrows. Westerman, the director of Artis, wrote to Vekemans, the director of the Antwerp zoo, that the transport of both the quagga and the zebra would have to be postponed due to bad weather: “It is still stormy so I think we should not risk the chance that our young zebra and your quagga catch a cold on the ferry to Moerdijk. The animals are both used to good stables. Being on deck in such tempestuous weather might expose them to ‘droes’ (a throat and nose infection) which is especially dangerous for animals that cannot be treated in the same way as horses.” The quagga, the gnu, the crane, and the pelican eventually arrived at Artis on May 9, a month later than originally scheduled.

The quagga, who lived in Artis for sixteen years, was described in 1880 by the aforementioned Winkler, an honorary member of the zoo. “This beautiful animal is a mare: she is very tame and even allows strangers to pat her. I did it more than once with her keeper standing right next to me, holding a piece of bread in his hand.” Little else is known about her. The very last quagga in the world died on August 12th, 1883, the same year that the Brooklyn Bridge was opened to traffic after fourteen years of construction.