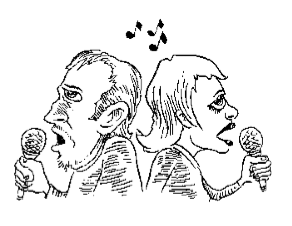 Learning about love by listening to love songs is a laughable notion. I would argue, however, that certain songs, breakup duets, where a lover and a beloved each get to sing from their separate viewpoints, can be instructive cases for exploring certain questions about love. With this theory in mind, I contacted Frederick Woolverton, an experienced couples therapist, to help me interpret breakup duets from across the pop spectrum and to see what light they might shed on relationships. What follows are selected lyrics from the breakup duets that Woolverton and I discussed. His commentary is in italics.

SM: You’re an old slut on junk
Lying there almost dead on a drip in that bed

KM: You scumbag, you maggot
You cheap lousy faggot
Happy Christmas your arse
I pray God it’s our last

SM: I could have been someone

KM: Well so could anyone
You took my dreams from me
When I first found you

SM: I kept them with me, babe
I put them with my own
Can’t make it all alone
I’ve built my dreams around you

This is a description of classic codependency in a relationship. It reminds me of a Beckett play where the bond between two people is forged by mutual hatred and scorn rather than respect and love. It’s the result of years of disappointed expectations. The psychoanalyst Harold Boris once wrote an essay called “On Hope,” where he says that hope is toxic. Hope totally ignores what happens in the present and focuses on one’s life in the future. Embedded is the hope that someday in the future, the other person will come through, which makes the pathological bond in the present justifiable, because neither party wants to give up what could happen in the future, so the bond is inextricable. They’re saying, “I am nobody without you; all I have is my hatred of you. The future could be better, so let’s keep hope alive.” It’s amazing how many relationships are based on that premise.

PO: You were working as a waitress in a cocktail bar
When I met you
I picked you out, I shook you up
And turned you around
Turned you into someone new
Now five years later on you’ve got the world at
your feet
Success has been so easy for you
But don’t forget
It’s me who put you where you are now
And I can put you back down too

SS/JC: I was working as a waitress in a cocktail bar
That much is true
But even then I knew I’d find
a much better place
Either with or without you
The five years we have had have been such good
at times
I still love you
But now I think
It’s time I lived my life on my own
I guess it’s just what I must do

He has no sense of himself. He has low self-worth. His worth is achieved by his ability to control and own another person. It’s what I call love-as-hostage-taking rather than love being a relationship based on reciprocity. This song shows us life and self through another person and dependent on control over another person.

She has the capacity to choose between being in love and being alone. She’s saying, “I’d still love you if you were capable of love.” She has become a true individual. She has a sense of her own self, her own inner strength.

HS: I gave you all I had
I gave you good and bad
I gave but you just threw
it back

JR: I won’t get on my knees
Don’t make me do that, please
I’ve been away but now
I’m back

JR: I walked away from you
I hurt you through and
through
Aw, honey, give me one more
chance

At first, he reminds me of the guy in the Willie Nelson song “Always on my Mind.” Willie has an intolerance of regret. He is capable of loving only retrospectively, and he refuses to regret what he’s done. He is incapable of saying “I’m sorry” and then acting differently, letting his present actions be informed by his regrets. In our culture, we’re into blaming. We’re not into apologizing. We’re into justifying, not learning from mistakes and then changing. Willie elevates this position and romanticizes it.

But the man in this song is regretful and can learn from experience. He owns up to what he’s done, and he’s ask­ing for another chance. She, however, has no trust. She is more responsive to feelings than to the current objective reality of his return. She’s responding to feeling-states, and we know that feeling interferes with judgment. She has no reason to trust him, but if this is going to work, she has to take his return and build on it. She will have to tempo­rarily put her immediate feelings aside, and follow judgment and a more thoughtful approach to a problem than a feeling-ful approach. I would say to her, “Give it a chance, but if it happens again, then don’t take him back.”

MW: Do you really wanna
know?

MG: I wanna know, what’s the
matter with you, baby?

MW: You know that you done
me wrong

MG: Sorry, didn’t mean no
harm
Oh baby, let me take you out
tonight
Make every little thing all
right

MW: You know you told me
there would never be
another
And you know you lied
When you lied, you hurt

MG: When I left and I went
away
I didn’t know how much I
loved you until today

He is acting clueless; he’s into de­nial. She’s based in emotional re­ality. To make a generalization, that’s more common in women. The psychoanalytic term for what he’s doing is “manic reparation.” He’s saying, “I’m going to make everything all right” while denying everything. He feels repairing damage that he has done to the relationship should be easy. Kind of like “If
I get you a diamond ring, everything will be fine.” In contrast, she’s staying in emotional reality. He doesn’t know what he wants until he’s lost it. He expects to get it back easily without guilt, regret, or substantive inner change. Then when he gets it back he takes it for granted again.

J: I’m a give you your keys back,
just give me my platinum
and black cards

And I can’t lie, I’m a miss
pullin’ your hair, hittin’ it From the back hard uh guess
what,
I’m just bein’ a man, I messed up,

fortunately I ain’t got the best luck

She’s feeling angry, hurt, disappointed, and she’s showing emotional maturity in the face of these feelings. She’s prepared to leave behind what isn’t good, and it will propel her into what we presume and what she believes is going to be a better future. She lets herself have the feelings and is able to let go of the relationship that she believes is not good for her and will hurt her. He, however, makes whoever abandons him into nothing. In psychology we call that denial. Instead of regret, there’s blame.

Regret and apology can be productive; they lead to learning and living dif­ferently. Blame keeps people from learning. He’s hostile and aggressive and re­fuses to acknowledge what he’s done to her. He’s saying, “You’re nothing anymore.” He denies her importance to him. He will not go on to have a better re­lationship as long as he stays in the blaming, vindictive mode.

BS: You don’t bring me flowers
You don’t sing me love songs

ND: You hardly talk to me
any more
When I come through the

door at the end of the day

BS: I remember when you
couldn’t wait to love me
Used to hate to leave me
Now after loving me late
at night

ND: When it’s good for you,
babe
And you’re feeling all right

BS: When you just roll over and turn out the light…
And you don’t bring me
flowers anymore

Very sad, very true. Couples who have been married for a long time often tell me that the specialness that marked the be­ginning of the relationship is gone. The worst thing we ever did was elevate the concept of unconditional love. It’s a re­cipe for one person taking another for granted. It’s the wrong paradigm for adult relationships. The best paradigm is dating, where each person, especially the pursuer, puts his best foot forward. If he doesn’t, he gets rejected. If he does—acts with generosity, brings flowers, holds the door—the other person re­sponds positively.

One of my patients is a ­hard-hitting lawyer. He’s in a healthy marriage, and he likes to say, “I still bring her flowers, and it still works.”

JWB: Funny how an evening turns into years

FB: Funny how we’re laughing through all of these tears

It’s a shame to be sayin’
goodbye

FB: Oh my darlin,’ should we
have one more dance
A prayer to the rain gods
to give one more chance

JWB & FB: The water will cleanse as we spin on the plain

FB: Take us to the ocean to find
love again

This song is about two people who aren’t paying attention to each other. They think they need a miracle. I think what they need is to get to work. There ain’t gonna be no miracle.

JP: There’s flies in the kitchen
I can hear them there buzzin’
And I ain’t done nothing
since I woke up today

BR: How the hell can a person
Go to work in the morning
Come home in the evening
And have nothing to say?

JP & BR: Make me an angel
That flies from Montgomery
Make me a poster
Of an old rodeo
Just give me one thing
That I can hold onto
To believe in this livin’
Is just a hard way to go

He comes home and is depressed. She’s angry and alienated. But it’s a whole different story when they sing together. Then it’s concrete, not abstract. I think they have a chance. I tell my patients, “Stop trying to make life good. It’s painful. Savor the moments of relief and pleasure and love because they keep us together.”

An Interview with Geoff Dyer