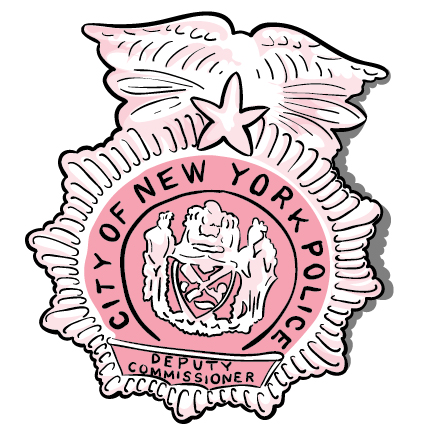 My grandfather William E. Perry Jr. was a career cop. He joined the NYPD in 1956, and during the ’60s, as a young sergeant, he became president of the Guardians Association, a fraternal organization of black officers within the department. In 1978, he was promoted to deputy commissioner for community affairs, and was one of the first black cops to hold the position. His boss, Benjamin Ward, was the first black commissioner of the largest police department in the United States.

After my grandfather was sworn in, he handed out three-quarter-sized replicas of his badge to the four women who’d attended the ceremony with him: his wife, Ina; and his three daughters, Nicole, Michelle, and my mother, Linda. In a photograph from that day, they surround my grandfather, who smiles in his dress uniform. The gold collar pins and the emblem on his hat gleam, and medals of honor crowd his lapel.

It’s common for cops to hand out badge replicas to their families. A badge is a source of pride, and passing down versions from parent to child is a way to build legacy and tradition. Although he never wanted any of his descendants to become cops, my grandfather—who earned a BA, an MA, and attended law school while working his job—did expect us to pursue higher education and to follow his example in terms of our ambition.

And we did. My mother is a college professor who also owns her own business. I’m a novelist. Our professional pursuits remind me of a letter from John Quincy Adams, in which he suggests that he was a soldier so his children could be merchants, so his grandchildren could be poets. And when I think of that letter, I wonder if Adams could even have envisioned a world in which I exist, in which his dream for his own progeny has been realized in a family descended from slaves.

A decade ago, I came across my mother’s replica in a dusty box. I was fascinated. At the center of the gold, eagle-topped badge is the blue seal of New York City. The city flag also bears this seal, but how many of even the most seasoned New Yorkers can conjure this image of a Dutch colonist and a Lenape man holding up a shield? On the shield are the arms of a windmill, two barrels of flour, and two beavers: symbols of prosperity.

When I told my mother I was writing about the replica, she said not to suggest that my grandfather had handed them out to give his family carte blanche. This is interesting, because it takes an assumption for granted: that cops would posit themselves above the laws they’re employed to enforce. Of course, I know they do extend “professional courtesy” to one another—after I saw my grandfather finesse his way out of a traffic ticket, my repeated imitations of this incident as a child became a family joke.

But I didn’t want the replica because I hoped to get out of tickets; I wanted it because I’m proud of my grandfather. And I’m too afraid to actually try and use it to take advantage of whatever privileges might come with it, anyway. I think that if I did, it would be taken from me; the cop wouldn’t believe I had any right to it. This is probably the most succinct analogy I can give for the internal dissonance that comes with knowing my grandfather served a system of law that wasn’t designed to serve him, or us.

Black cops uphold laws formulated to oppress them as black civilians. There’s a 1970 New York Times article about the Guardians and their response to a police-brutality case. A member of the group had witnessed two white cops beating a black suspect, and when he told his commanding officer about the assault, he was ordered to keep quiet. In the article, he recounts being asked by white colleagues, “What do you want to be, a soul brother, or do you want to be a policeman?” He answers, “I was a soul brother even before I even thought of being a policeman,” and they say that if he wants to be a soul brother, he should take off his uniform and get off the job.

My grandfather is also quoted in that article. As president of the group, he issued a statement in support of the Guardian who spoke out. My mother remembers receiving death threats at the house after that. My grandfather had failed to uphold a code of silence that protected (white) police power, at the expense of both black civilians and black cops. As a consequence, he and his family were targeted.

The link between policing and structural racism is inextricable, and my awareness of this is bound to the replica I possess. The seal of New York, the one at the heart of the badge, illustrates the conflict between the mythology of policing and our nation’s legacy more beautifully than I ever could. The image is supposed to represent unity in its depiction of a pact between the colonists and the Lenape. In reality, the Lenape population was ravaged by European disease and war, and was eventually expelled from the region. Today, Native American men are killed in police confrontations at a higher rate than any other racial group; black American men are the second most likely to die in these incidents. Black men like my grandfather carry this badge, and guns, to enforce a system of law that kills them.

Knowing that, I often wonder why my grandfather became a cop. I believe it’s because he wanted to defend the family he loved—and love makes all of us vulnerable. Perhaps he hoped, by ascending to the middle class and by gaining the privileges offered to a servant of the law, that he could insulate us from the dangers of the world.

My grandfather, like most officers, refers to his badge as a shield. When he was a beat cop, he wore it over his left breast pocket, as is tradition. To protect his heart.

An Interview with David Foster Wallace

The Man Who Could Not Disappear