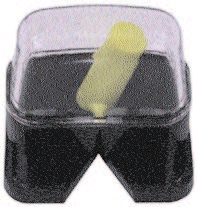 If you’re looking to attach a bookshelf or cabinet or anything you care about to your wall, you’ll need to find anchorage for your mounting screws in an upright two-by-four stud. Connoisseurs of disaster may rely on the load-bearing competence of drywall screws and anchors, but if you would like the thing you’re attaching to the wall to stay attached, you’ll want to spend a moment prospecting for sturdy pine.

Before hanging my bookshelf, I went out and spent $3 on a magnetic studfinder made by the Stanley Corporation. It is a simple thing: a small cylindrical magnet sheathed in a yellow plastic harness which toggles on its vertical axis beneath a transparent dome. The dome and the harness are fixed to a black plastic browsing sled, smooth-bottomed so you can scoot it easily across wallboard while it does its work.

The studfinder’s toggling magnet is not actually interested in finding studs. Rather, it has a specific affection for the nailheads hidden beneath the paint, and the toggle will quiver with interest when you steer it over one. You hope, of course, that the studfinder is stirring because of a nail that is tacking the drywall to a stud, but any strays or accidentals will also set off tremors in the toggle, which is one of the magnetic studfinder’s frustrating delicacies. Furthermore, the studfinder performs poorly on imperfect wallboard; any keloid drabs of spackle, kernels of grit magnified by years of accreted paint, or tiny umbilications in the plaster will jostle the toggle and send it quaking in error.

After several minutes of “seshing” with the thing I still hadn’t found a spot where the toggle would yaw with any real conviction. I drilled sprays of pilot holes and felt only the brief, collapsing resistance of the wallboard and then a great nothingness. I paid a visit to my upstairs neighbor to talk about the problem. He is a former cheerleader, and he is one of the toughest, most capable people I know. He has been punched in the face so many times that the flesh around his eyes looks like sweetgum bark. I slid the studfinder around the wall for him and showed him the pilot holes. “You see?”

But my neighbor wasn’t interested. He picked up one of the wooden brackets I had made for my bookshelf: a 90-degree brace made of 1x2s with another mitered piece connecting the two legs. He seized the brace by the hypotenuse and clapped it against his hip like a tambourine. “I’m gonna tell you,” he said. “I watched you out on the porch messing around with your saw, and it didn’t look like you knew what the hell you were doing. But this thing is solid, and I’m proud of you. What’s this shelf for, a bunch of books? These walls are insane. Three inches of drywall over top of plaster. Need a five-inch lag screw to hit anything solid. Let’s hang it on drywall anchors. It’s not like you’re trying to hold up the Statue of fuckin’ Liberty.”

He disappeared and returned a moment later with a clanking bag of hardware. I knew it was a poor idea, but I let him hang the shelf his way. When it collapsed three days later in the middle of the night, I woke up with a lamp in my hand because I’d thought a murderer was coming through the window.

All told, Stanley’s magnetic studfinder left lingering regrets. I wondered if I should have gone for something grander, one of the $80 digital models that sounds the wall’s hollows via electrical field. “To tell you the truth, studfinders are somewhat looked down upon,” said Tripp Renn, a building contractor in Chapel Hill, North Carolina. “I’ve never used one. Really, there are surer ways of finding a stud. If a sensible person framed the wall, the studs are spaced either 16 or 24 inches on center. You can find one next to an electrical outlet or by looking for nails in your baseboard. Once you’ve found one in the field, just measure out from there.”

Now Let Us Laugh Together