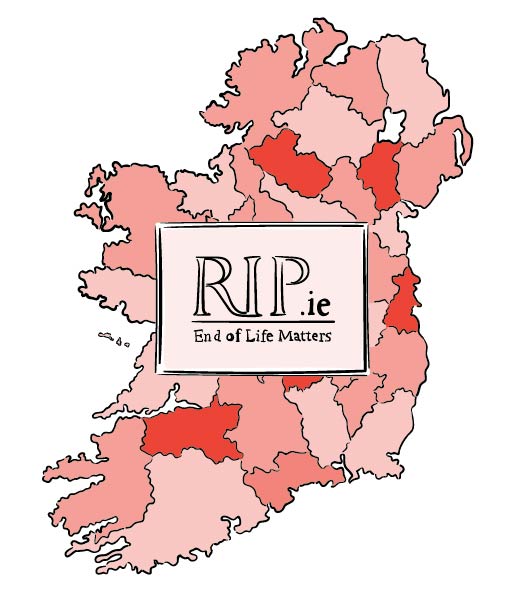 In birthday cards and book inscriptions, my father rarely signed off as “Dad.” Instead, he wrote his name carefully with three accents: Míċeál. It’s an Irish name pronounced “Me-hull,” and I’ve always wondered if his choice to use it with me was part of some larger plan to infuse his American daughter with nationalism for a country on the other side of the Atlantic. If so, it worked. Early home videos show me chirping, “Míċeál,” not “Daddy,” with chubby toddler arms outstretched. When I was nine, I presented a book report to my fourth-grade class on the assassination of Irish revolutionary Michael Collins. My best party trick was struggling through “The Foggy Dew,” an Irish lament just outside of my vocal range, about the Easter Rising, a struggle to end British rule.

My dad, as I later called him, returned to Ireland four times after I was born. For the second visit we made the journey as a family. On subsequent trips he traveled alone, first for his mother’s funeral and then his father’s. In 2016, he died too. I started making funeral arrangements in Washington State, where he lived, including writing his death notice. It was short but I agonized over it, adding and removing and re-adding commas and considering which of the various spellings of his name to use. In the end, I went with Mícheál, the most common version, though it wasn’t the most familiar version to me.

On the Sunday morning that the notice ran in the local newspaper, I walked to the grocery store to buy a copy and burst into tears among the produce. The paper had misprinted my dad’s name as “Michael.” It was probably a typo, but it felt personal, as if the paper of record couldn’t be bothered about this brief missive marking one of the most significant events of my life. Death notices and obituaries are as much for the people left behind as they are for the dead—
a small act of remembrance in service of mourning. In Ireland, rituals around death seem to be treated with more care.

About a month after my father’s funeral in the United States, a funeral home in Ireland published a similar death notice on an Irish website called RIP.ie, giving information about a memorial to be held for him at a church in my father’s hometown. RIP.ie is a sort of clearinghouse for end-of-life matters. The site lists information about funeral directors, charities, and headstones. It’s also an archive of Irish people who have died anywhere in the world, even those who have emigrated. Dympna Coleman founded the site with her brother in 2006, after learning belatedly that her friend’s father had passed away while Coleman was living abroad. In an article several years ago, she recalled coming to the realization that Irish expats, among others, didn’t always have access to traditional death notice venues. Now the site provides a digital bridge back to a country where death and funerary customs are woven into social life.

My father’s notice named both his childhood home and his adopted one, in the United States. There was a map to the church where the memorial was held and a link to buy a sympathy card with a personalized message for about six dollars. RIP.ie also lets users sort death notices by region. On a page that lists the country’s most recently deceased, there are search fields to narrow the results by first, last, and maiden name, dates, county, and town of residence. In three clicks I can see which of my dad’s old friends and acquaintances recently died in the village where they grew up.

Printed death notices are relatively new in Ireland, where for many years oral traditions prevailed. When chieftains died in Gaelic Ireland, bards would give formal eulogies that survived for generations, noting their noble descent and good deeds, according to Irish historians Ciara Breathnach and David Butler. But the Irish also memorialized the dead in writing, etching their lineages in wood and stone in a medieval alphabet.

By the eighteenth and nineteenth centuries, Irish newspapers ran stories when prominent citizens died. Back then, the practice of documenting death was generally reserved for the rich and powerful. It wasn’t until the twentieth century that death notices became popular among members of the working class, a trend helped along by growing newspaper readership. People would buy papers just to see who had died.

Today, radio stations in Ireland report on local death notices as part of their morning programming. But it’s maybe more common to scroll through RIP.ie. Coleman has said millions of people in Ireland and abroad visit RIP.ie each month. After about ten years, the website was making an annual profit of over one hundred thousand dollars in advertising. A reader joked in the comments of one news article that RIP.ie was “Facebook for old people.” But some people really do check it as often as social media. “I like to see who’s popped their clogs,” a cousin told me.

I’ve often wondered about Ireland’s relationship with death. When I was growing up, my father told me stories about hunger strikers acting in political protest. Tales of suffering and struggle are part of Irish cultural lore—from civil war to the Troubles to the Potato Famine, during which more than a million people died in only five years, and at least one million more emigrated from Ireland. Death and violence roiled the Republic of Ireland after eight hundred years of occupation. In Northern Ireland, still part of the United Kingdom, more than three thousand people have died in conflicts between British loyalists and the Irish Republican Army. How have so many losses, such massive mortality, affected how the Irish confront death—and how they keep on living?

As an American, raised on adages about living in the moment, I sometimes found the Irish fascination with death somewhat grim. But it’s in that embrace of death, maybe born from facing off with history, that I’ve found comfort amid my own losses. I remember that my father returned from each of his parents’ funerals with a stack of old photographs.

One showed him and his siblings laughing around a kitchen table, his right hand wrapped around a cup of tea and the other gesticulating in the air. Their faces reflected grief but also joy, maybe because they were all together in the home where they grew up. In a time that can feel so lonely, there was community too.

One of my dad’s sisters carried his ashes back to Ireland, his fifth and final trip since I was born. She drove around the countryside where they grew up, pulling out the urn and pointing it toward the town, the mountain, the sea. Before he was buried in the cemetery, his name etched beneath those of his parents, she told him, “You’re home.”

Both of You But Better