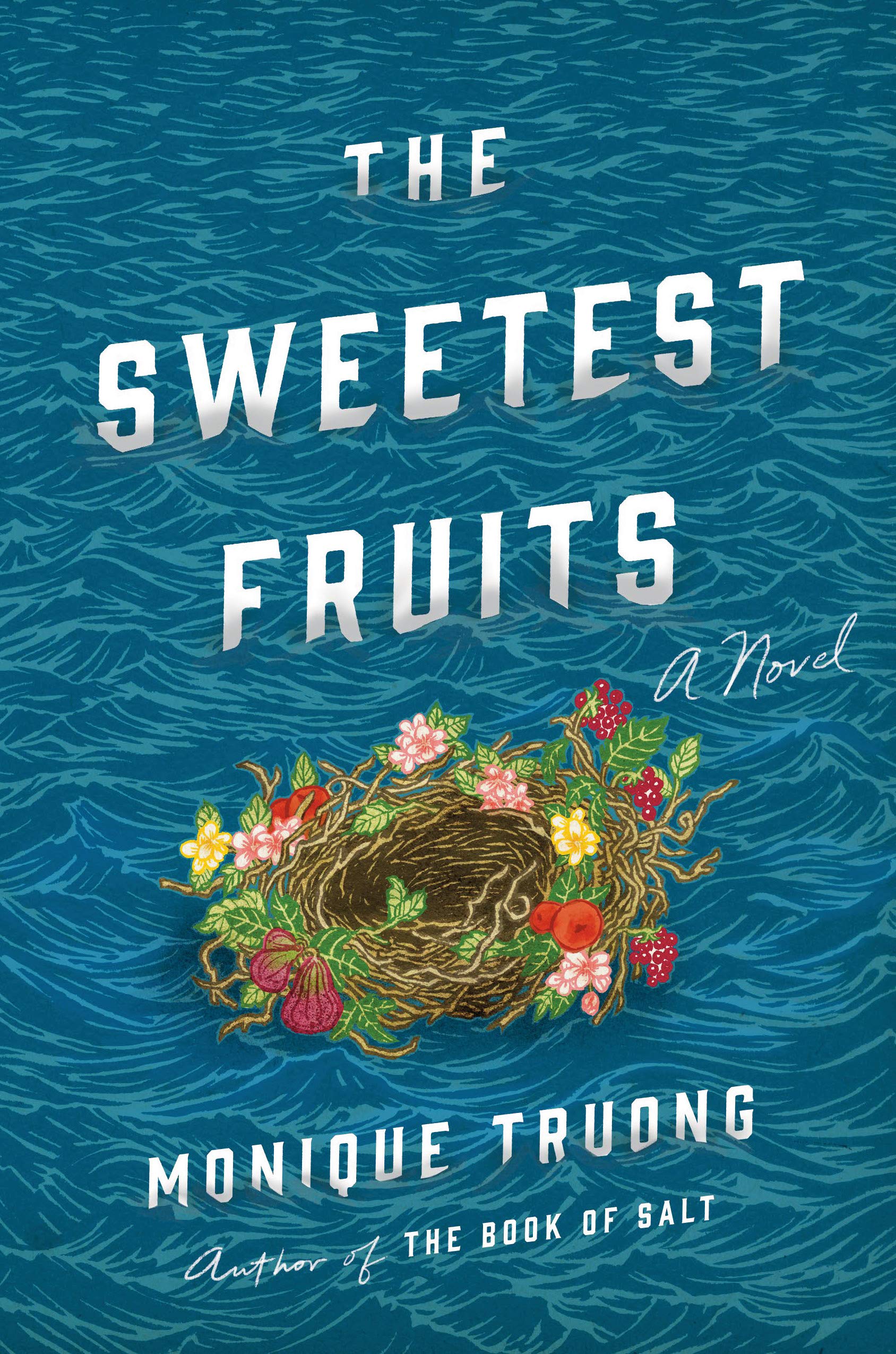 Format: 294 pp., hardback; Size: 5.25″ x 8″; Price: $26.00; Publisher: Viking; Number of Narrators Who Are Way More Interesting Than the (Admittedly Very Interesting) Historical Figure Who Inspired This Book: 3; Most Unexpectedly Appetizing Meal: Cincinnati oysters; Number of Previous Books by Author: 2; Clause on Back of Book: “The Sweetest Fruits is a feast you’ll want to devour”; Representative Passage: “Pat began by taking his notebook of ideas and writing them all up for the Commercial. He even wrote a story about me. Can you imagine that, Miss? Cobbling together the stories that Aunt Sweetie had told me and that I had told him, Pat wrote that a reporter—at the Commercial Pat didn’t have a byline either, at first—sat on the kitchen stairs of a boardinghouse while its cook—a healthy, well-built country girl, good-looking, robust, and ruddy—shared with him ghost-people stories. Pat didn’t mention me by name or Mrs. Halsam’s, but if you read that story now you would know, Miss.”

Central Question: Who are the women who nourish the world’s brilliant writers—and how do their stories get told?

Though food is bountiful in The Sweetest Fruits, nourishment is hard to come by.

In Monique Truong’s telling, Patrick Lafcadio Hearn—the writer and world traveler at the center of her new, meticulously researched historical novel—comes into the world hungry. He suckles determinedly at his mother’s breast, his bottomless appetite sustaining him while his twin brother, who isn’t nearly so voracious, languishes for two months, then dies.

His infant brother’s starvation amidst the Mediterranean abundance of Lefkada, a Greek island, is one of many moments in the novel when bounty and loss become so entangled that pulling them apart is impossible. By the time Lafcadio (as he’s known in the U.S.) turns five, his Irish great aunt has designated him heir to her vast fortune—but on the condition that his Greek mother, Rosa, who narrates the first third of the novel, sign away her maternal claims and leave Ireland forever with his younger half-brother. From there, the waves of plenty and misfortune only build, sweeping Lafcadio across the globe and through the kitchens of the novel’s other two narrators: his first wife, Althea, a boarding house cook born into enslavement on a Kentucky plantation, and his second wife, Setsu, a samurai’s daughter from Matsue, Japan.

The novel’s depictions of the women whose care and cooking made Patrick Lafcadio Hearn’s life possible are so rich, so intricate, that it’s hard to believe its seed was a bare-bones entry in The New Encyclopedia of Southern Culture. There, Truong first learned of Hearn and his collection of Creole recipes—the earliest of its kind, published while he lived in New Orleans. There, she discovered he was Greek-born and Dublin-raised, and had come to Louisiana by way of Cincinnati. And there, in the entry’s concluding line, she encountered a snippet of biography so difficult to reconcile with this already improbable life that she wondered if it was apocryphal: after writing the cookbook, Hearn had gone on to settle in Japan, where he’d lived under the name Koizumi Yakumo and authored a series of Japanese folktales. As Truong put it, “I sensed that all the good bits—the crackling and the cornbread, if you will—were missing, and I set out to discover more.”

Gaps between the lives we live and the stories that actually get put to paper have always been at the center of Truong’s work. In her first two novels, they emerge through characters who, like her, are members of a far-flung Vietnamese diaspora. The Book of Salt, her first novel, narrates the metropolitan life of a gay cook from French-colonial Vietnam who has become the personal chef to Gertrude Stein and Alice B. Toklas. Her follow-up, Bitter in the Mouth, gives readers an American adoptee whose only memories of the Vietnam she’s fled come in the form of synesthesia that gives individual words specific tastes. Collapsed like this into one-line summaries, both novels can be labeled with and contained by sterile abstractions like “cultural trauma,” “displacement,” and “forced assimilation.” But on the page, they’re infinitely more alive and vivid than that, reveling in the sensory richness of the nourishment—both culinary and cultural—that persists even when home is unmoored and the stories we look to for sustenance get cut off.

If all The Sweetest Fruits did was restore that richness to the life behind Patrick Lafcadio Hearn’s disjointed encyclopedia entry, that alone would have been plenty. The novel compassionately renders the many abandonments and dislocations that leave Lafcadio perpetually uncomfortable, out of place, and bracing for the next hurt. It also pays careful attention to the now-anachronistic ways those with lighter complexions racialize and exoticize his “Eastern” Greek roots. Crucially, it does all this without minimizing the harms that Lafcadio himself inflicts on others as he circumnavigates the globe. He loves and leaves the less privileged women who sustain him, just as his father, an officer in the English army, abandoned his mother Rosa. Truong has said that her gut told her “that Lafcadio was hungry: for love, family, a sense of belonging, a daily meal that fed body and soul.” In her telling, the world which leaves him forever half-nourished and ravenous for more is also the world that he, with all his loss-tinged advantages, helps perpetuate.

But in The Sweetest Fruit this nuanced portrait is merely the connective tissue that supports the novel’s central achievement: its carefully researched and imagined depictions of the women of color whose nourishment made Patrick Lafcadio Hearn’s life possible. Each woman’s narrative encompasses far more than just the man whose absence provides the occasion for its telling. Truong has a gift for capturing the sensory life of kitchens, and she lavishes that talent on the care and nourishment that each woman has given Lafcadio – but only so that this culinary “care work,” as we’d say if Lafcadio lived in the twenty-first century, can serve as beachhead. The meals they make for him, the clothes they sew, the moods they withstand all become passageways into their own untold stories, revealing fascinating lives and internal waters that are every bit as expansive and windblown as the world-travelling Lafcadio’s.

Even as Truong lovingly renders these stories, she also points to the ways the world inevitably fractures, erases, and reshapes them as they’re transformed into published accounts —if, that is, they don’t get lost entirely. None of the narrators in The Sweetest Fruits are able to write in English and of the three, only Setsu, who is preparing to compose her memoir in Japanese, has any real agency over whether and how her story will make it to print. As she says to her deceased husband’s photograph in the novel’s closing section, she hopes her forthcoming account will correct the misrepresentations in Elizabeth Bisland’s 1906 biography The Life and Letters of Lafcadio Hearn—a real text which Truong deftly excerpts to frame the novel. But even as Setsu meditates on what she must include—and leave out of—the memoir she will write to pay the family’s bills she is sanguine about how her words may be twisted once they’re put into a translator’s or publisher’s hands.

As for Rosa and Althea, they have even less power over their stories. Both are illiterate, and therefore dependent on the pens of other women to get their stories down. In Althea’s case, the woman holding the pen is a curious but skeptical Cincinnati reporter investigating her claim that, though Lafcadio had abandoned her decades earlier, her marriage to him had remained legally in force until his death. Rosa’s scribe is the travelling companion to whom she dictates a letter for then-four-year-old Lafcadio as she sails home to Greece. In both cases, these pen-wielding women have their own agendas and perspectives. They interrupt and interject. Sometimes they even stop recording Rosa’s and Althea’s stories entirely. Readers have no way to know which of Rosa and Althea’s words actually get committed to paper, and many reasons to doubt that their accounts will be cared for as they had hoped.

In other words, Truong’s innovative narration gives us the stories of three incredible women right at the moments those stories are being repurposed or lost. Even more importantly, it shows us those erasures in process. Bitterness is inescapable in such a telling, as it is in any effort to recover or fill in the histories of those whose voices have been written out of official records. But Truong’s genius for finding joy and life amidst trauma and dislocation ensures that the novel she germinated from the traces left by Patrick Lafcadio Hearn is filled with plenty and sweetness, too. In The Sweetest Fruits, even fragmented and forgotten stories offer sustenance. And in nourishing them it nourishes us.