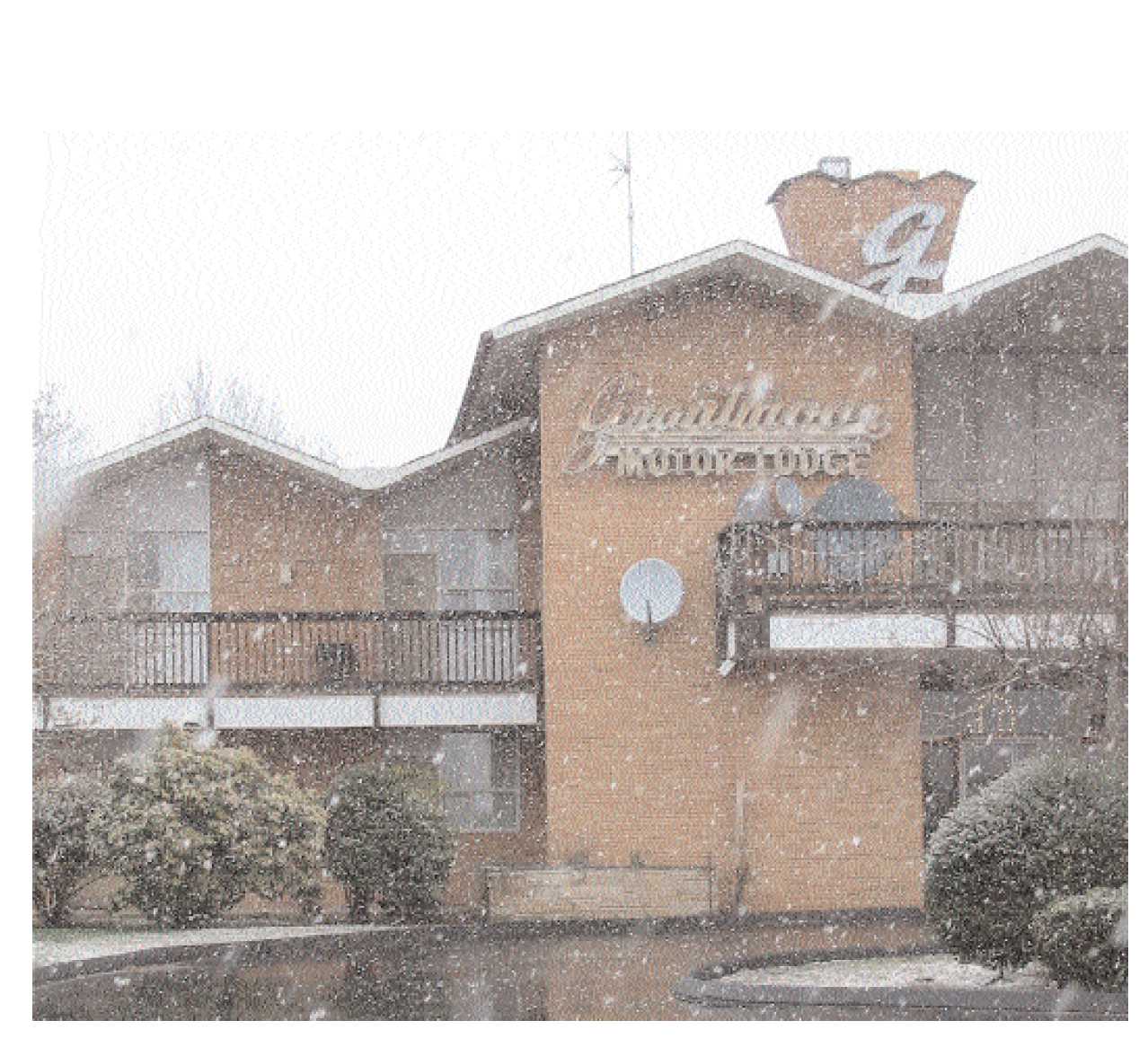 The Grantmoor Motor Lodge is located on the Berlin Turnpike in Newington, Connecticut. Originally constructed during the 1940s to cut down the drive from Hartford to New Haven.

The Turnpike was popularly known as “Gasoline Alley” due to the thirty-two gas stations that lined its eleven-mile stretch. Nowadays, the Turnpike serves as the main route between Wethersfield and Meriden; the nickname has long since been forgotten.

Although large chain stores have taken the place of the gas stations, the strip still maintains some unique local flavor. Among the modern stores–Lowe’s, Krispy Kreme, Raymour and Flanigan, Burger King–are a few independent motels and Fifties diners.

The Grantmoor stands out from the other motels alongside the road due to its large steel sign that is comparable to Wal-Mart’s. Its parking lot, which is often deserted, is shared with the Sphinx Temple and the Golf Improvement Center Driving Range.

In the distance, the motel’s iconic white modernist zigzag can be seen with a colonial “G” atop it.

The lobby of the Grantmoor has a vintage feel with its wood-vinyl walls covered in Indian tapestries, and a sheet of glass to protect the proprietors from their customers.

Behind the front desk, there is a row of pictures that show off the various kinds of rooms they provide; single guests and couples only. The most luxurious room is presented on the far right of the pictures, arranged in a left-worst to right-best order.

This room comes complete with a heart-shaped waterbed, a heart-shaped Jacuzzi and two different flooring options. A car stereo is built into the headboard of the bed and a lighting control panel is available for a selection of colors, plus the option of somber shades.

Mood is just a fingertip away.

The selection of rooms to the left of the Most Deluxe Room decreases in extravagance, but increases in absurdity. First there are round beds, then four-poster beds with sash, then without, with and without Jacuzzi, and with/without television.

Finally, there is the Most Far Left Room, with a standard double bed, bureau, no Jacuzzi, no television, and scuff marks on the wall, but with a cigarette odor.

This room, however, is still distinguished by its mirrored ceiling, the same feature in all rooms of the Grantmoor, from the Most Deluxe to the Most Far Left, available for rental by the hour, night, or week.

For those who like to engage in aquatic activities, the Grantmoor boasts a partially-filled pool and a hot tub filled with pebbles and periodicals.

The Shady Lawn Motel is located at 3000 Berlin Turnpike in Newington, Connecticut and is operated by Raju and Devyani Patel. The lodging offers 92 rooms, with rates ranging from $30 – $150.

The firmness of the mattress is considered “wishy-washy to doable” and there are two All-Terrain vehicles parked outside the lobby. It is unclear if the Patels have any relation to the Shady Lawn.

The ability to reword without altering the content or its meaning is an essential part of avoiding plagiarism. This is done by modifying the structure of the text while keeping the context intact. Doing this ensures that the semantic meaning remains the same.

A Microinterview with ST Joshi