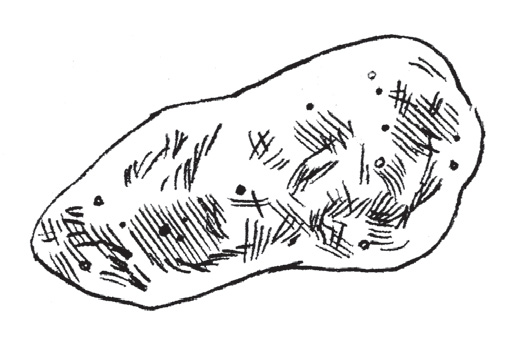 If there is one thing people want to know more than any other, it is when I am going to do a column about gardening.

“I have been just about going crazy for some rib-tickling tales of watering something” might be your justifiable concern.

I have a doozy about a radish, but I’m saving it for my acceptance speech when I win the PEN/Faulkner. Fear not, though. It has often been said that even a mediocre story about gardening makes everything that Marcel Proust wrote look like a turd. With that in mind, I give you this fairly solid number about a certain potato of my acquaintance. We’ll call our potato “Carl.”

My first year of serious gardening coincided with the worst drought in years—a typical bit of misfortune, yet not unwelcome as a challenge. My fellow gardeners will know what I am talking about. We are a quixotic lot, don’t you find? I love how we stand there with our watering cans and big floppy hats and bright yellow gloves, otherwise nude, and gaze into the distance as someone takes our picture for a charitable calendar—or at least that’s what we tell the police when they arrive! But such moments of respite are rare. Sometimes it seems that old Mother Nature herself is working against us, or possibly vampires, or, most likely, gophers that are also vampires. It’s all part of the excitement.

I cannot say my trial garden was a success—in fact, quite the reverse. I so vividly recall standing there in the arid desolation, close to weeping, when I noticed a tiny bump in the dirt at my feet. A few frantic moments of digging revealed that bump to be none other than Carl, my sole achievement, my lone potato, the solitary foodstuff I had managed to coax into being. Now, I’m the first to admit that as a potato, Carl wasn’t much to look at—misshapen and bumpy, riddled with the telltale greenish tint that is the surest sign of deadly glycoalkaloid poisoning—but to me he was as enchanting as a magical dream.

I took him inside, tied my bib around my neck, and ate him at once, greedily, raw, with nothing but a pinch of salt to dress him. If you have never eaten a potato plucked directly from the earth, you are truly missing out on something special: an experience that many have called the equivalent of concluding the act of physical love thirty-five times at once.

Of course, not everyone is cut out for a life so closely tied to the immutable rhythms of nature. It takes a certain kind of person to plant a tiny dried-up pip or husk in the ground and expect something beautiful to emerge—a severely delusional person. As you have certainly guessed, I had managed to grow nothing at all, and Carl did not exist. But I needed him so much that I had created him with my broken mind, one of the most common experiences a person can have, as documented in films such as Fight Club and Shutter Island. In fact, the great John Cusack starred as Carl in Love, Potato—a quirky “indie” favorite written and directed by Noah Baumbach. “Deliciously dark… deliriously wicked,” raved Entertainment Weekly.

I was unable to attend the premiere, laid up in the hospital as I was with a terrible fever, hovering near death, having given myself a staphylococcal infection by severely biting my own hand. That’s right, I thought my own hand was a potato. All the doctors said I made pretty impressive headway attempting to eat it.

As I type these words with my seven remaining fingers, all my thoughts are of my garden. I look forward to the time when I am lying dead and my body begins to decay, nurturing my withered little crop of lettuce and carrots with its bounteous supply of healthful minerals, the only thing of value I have to offer the world. The resulting salad will then be fed to my worst enemy, after which he will be given an embossed card printed on the finest stock and in the most exquisite calligraphy, revealing that he has just eaten a little part of me. Gardening is fun!

An Interview with Todd Haynes