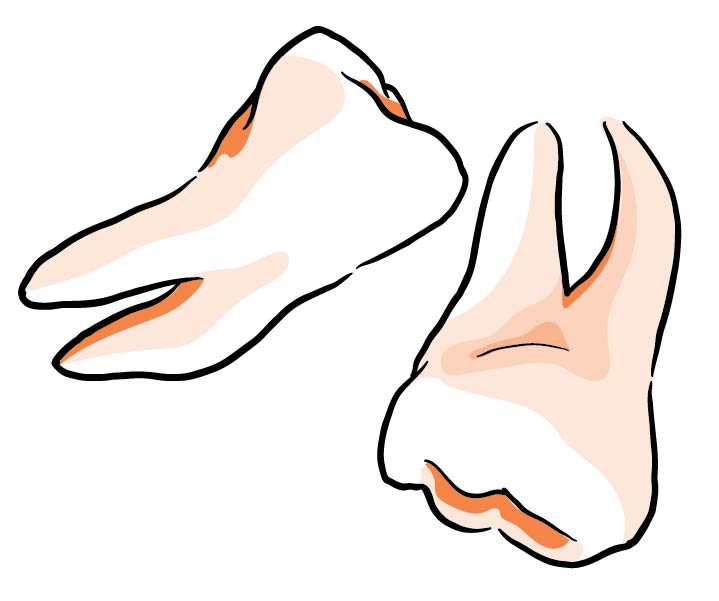 I haven’t seen my mother in a while. We decide to meet on a corner of a street in Chinatown. When I get to the corner, I see her. She is wearing a white coat and the zipper is open even though it is cold and she is talking on a flip phone. She waves to me and smiles. I notice she is missing two teeth, but I don’t say anything about that. When I was a kid she told me she didn’t like the taste of toothpaste and that she preferred using salt. It had a rougher grain and did a better job, she said. My mother had straight and even teeth. She never liked sweets. “Never got a cavity my whole life,” she liked to brag. “I don’t know about dentists. I don’t get cavities, but when I visit I always come back with one. I swear, they put it in themselves!” We walk toward a restaurant and I pretend the teeth are not missing. It is the left canine tooth and the tooth behind that one. She is talking about her new job and I listen to her speech, to see if there are any words that sound different now, how she accommodates them with a hole in her mouth. But I hear nothing different. She used to work in a cake-making factory. Now she works in a factory that puts vegetables, mostly onions and ginger, into a net bag. She can’t keep track of how many she has packed and so I teach her how to use a calculator. She is amazed at the buttons. “It does so much thinking,” she says. When my mother laughs she covers her mouth, but as the afternoon wears on she forgets and the missing teeth are there. I like the missing teeth. They make everything she says funny. She tells me she had been working on a farm where they grow cannabis, but she got terrible headaches and had to quit. She says she thinks her roommate smokes weed. “He’s a young man,” she says. I wonder if this is a boyfriend or something, but she says he’s ugly and doesn’t live there anymore. He stole some money from the couple whose house they rent rooms in. I look at her missing teeth again. The thing I wonder now is if she lost her teeth in a fistfight. It’s the exact spot a right hook would land. She’s one of those people you would want on your side in a fistfight. The kind of person who, after having her teeth knocked out, would swallow the teeth and go on fighting. I can shit it out in the morning, she’d say. When I was a kid and had a loose tooth, she’d ask to see it. And when I showed her which one it was, she’d reach in there and yank it out. “There,” she’d say, as if it solved everything. My mother likes to tell stories. I don’t know if any of them are true. But she is always the hero in each one. The one who changes the tire for some helpless man on the side of the road. The person who happens to be there when a wife comes charging down the stairs with a suitcase because the wife just discovered her husband in the bathroom with a lover. I ask her what she said to calm the kids, and she tells me, “You’ll understand. When you’re older.” I think, actually, it would take a lot to understand what just happened. But I don’t tell her that. I tell her that when you lose a tooth, if you put it under your pillow at night, a fairy comes and gives you money. “Each time?” she asks me. When I nod, she says, “Sounds expensive to me. Not to mention stupid.” Finally, I ask her what happened to the teeth. Why they aren’t there anymore. What she did with them. She smiles like she does when I ask her if she has a boyfriend. “It hurt. So I took them out.” I wonder what that involved. Just reaching in there and removing them. Teeth are quite difficult to pull out, actually. I think about the time the dentist removed a wisdom tooth from me. The numbing of the gums with a dab of cream from somewhere. Then a needle thick as a fancy pen through the gums. A few tools that looked like wrenches in different designs and sizes. The dentist put his leg up on the side of the chair to get leverage. Then I remember blood shot out of my mouth and splattered the goggles I was given to wear. A hand came and wiped it away. It took a lot to pull out a tooth. It will be my birthday soon. I think of reminding her. Then my mother interrupts me with a laugh. “You’ll understand. When you’re older,” she says.

An Interview with Sheila Nevins

An Interview with Dawit Giorgis