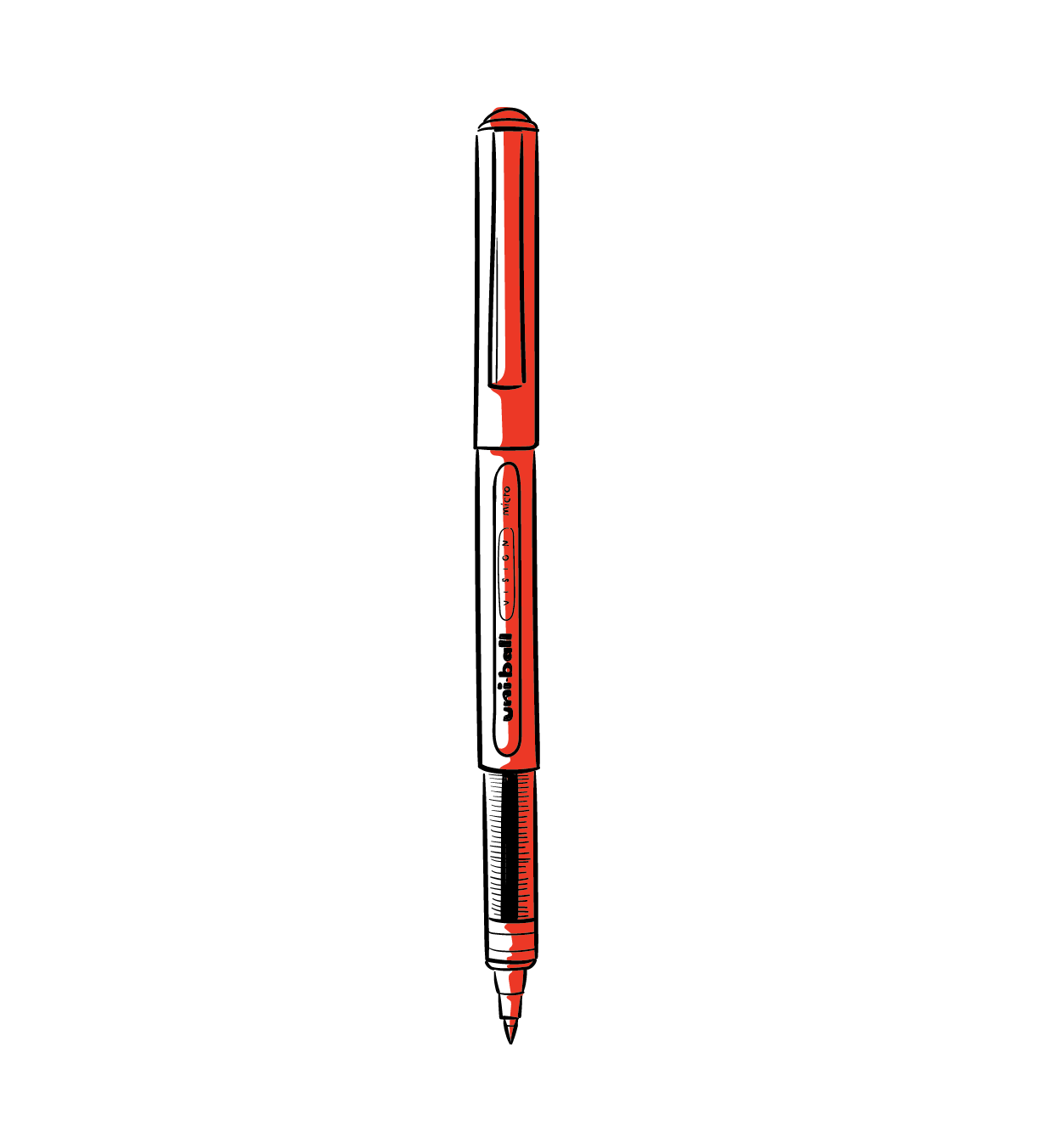 A good pen makes your handwriting look good; a great pen makes you look good. The uni-ball Vision Exact Micro, in black, is such a pen. It is, I think, the best pen, and the best pen makes you feel good in the way that the best anything does when you consume it over and over: it validates your choice and, therefore, you.

The problem is that the uni-ball Vision Exact has been discontinued, and my stockpile is running low. Allow me to explain. As an unconfident, oversensitive kid, bullied for asking for validation and for caring too much, pen shopping was a relief. I would spend delighted hours at stores searching for the perfect writing utensil. (Gelly Rolls, with their foggy plastic and rounded caps, were cool-kid currency and, because of that, my favorite.) I wanted to feel that for once I’d made the right choice, that I’d been a savvy consumer and therefore a savvy person in the world.

Finding the Exact was a fluke. I first encountered the pen—long after Gelly Rolls had become passé—during my first college winter break at home, where I spotted its diminutive cap among a collection of mostly retractable pens in my parents’ kitchen. The needle tip its cap protected released ink that was supposed to result in “intense coloration and document security,” a feature the company claimed made it ideal for tax returns and paper ballots. Over the course of a few months, I grew to love the Exact; I got used to the slim point, to the translucent rubber grip that I didn’t actually grip but relied on instead to hold the pen steady against my hand. I appreciated what its name told me it was: exact. It said I was a person who used a very specific type of thing and that specific type only.

By the time the Exact starting disappearing, around 2011 or 2012, I was in my mid-twenties and gainfully employed, deep in the throes of adulthood, yet not exactly. Outside of work, I labored far too long trying to make weekend plans while still trying to seem chill, pretending that the petty conversations from my childhood hadn’t just migrated from AIM to Instagram and Gchat, where instead of telling me to shut up, my supposed friends just stopped responding. My loyalty, that deep stubbornness, wasn’t so great when it came to the animate world. I was learning. Step one was different friends.

But in the midst of giving up on the old crowd—in the midst of learning to trust myself and to be more flexible—the pen sort of disappeared, gone from Target, Staples, and Amazon. My self-confidence wavered; I started again to text the friends I’d written off, and I went on eBay to order three boxes of twelve uni-ball Vision Exacts from a woman in Connecticut.

I never mentioned the pen discord to the disappearing friends. I didn’t mention it to anybody, fearing it’d mark me yet again as a bullying target, until a couple of years later, when on the first day of grad school, I decided to stop putting on airs of being laid-back. The man sitting next to me asked to borrow the Exact I had lying on my notebook, and as I fished out a different pen for him to borrow, I explained the supply problem. “You’re very particular, aren’t you?” he asked, no hint of accusation in his voice. I relented and let him try the Exact, and as it smeared under his left hand, the inked letters drying into windblown versions of themselves, I agreed.

By the next semester, the pen borrower and I were friends, and not infrequently he encouraged me to be more spontaneous. I reluctantly listened, going out at the last minute, changing destinations, and I found myself letting go of the need to plan which pen I’d be using down the line. For so long I’d been saying if: If these last me through grad school applications, I’ll be fine. If these last me through grad school… Then I had no if. And I wasn’t even sure I wanted one. After all, what’s another project but another chance for the pens to not last through it? Brand loyalty might feel good in the moment, but it ends up just catalyzing the fear that everything will go to hell; it ends up manifesting the plan to end something I haven’t even started. The pen, I realized, held not my certain relief but my fear of uncertainty.

That fear persists, especially now that I’m down to the last half dozen in my stockpile. I’ve learned to share my pens better, but I still often find myself in the depths of planning. Brand loyalty, I’ve found, is more than just preparational hoarding. It’s validation, a guarantee against future decision-making, an object-based reassurance that we’re making the right choice and will keep making it as long as we keep buying.

I’m still searching for the pen that will inevitably replace the Exact. I have a few candidates, including the Vision Needle 0.5 mm, which I’ve begun using for “lesser” tasks, like grocery and packing lists. A part of me wants to run out of Exacts just to force an end. I know it’ll be freeing: when I hit the pen aisle, I’ll be happy with what’s there—and what’s not. Until then, I’ll be savoring the stockpile, one sentence at a time.

An Interview with Mary Harron